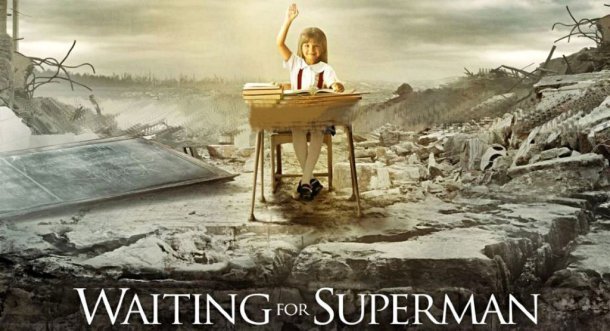 Excerpts from my movie review in Taki's Magazine:

Davis Guggenheim’s much-publicized documentary with the meaningless title of Waiting for ”Superman” makes the (by now familiar) liberal centrist case for school reform: the cause of the achievement gap is bad schools, which are the fault of bad teachers, who are protected from termination by bad teachers’ unions.

Why do so many liberals swear by what the Chinese might call the Three Bads Theory?

Guggenheim recounts how he made a 2001 PBS documentary, First Year, about the heroism of public school teachers. Why did he change his mind? Because, he explains, his children grew old enough for school, and he found himself driving from his home in Venice, California past three public schools to a private school, thus ”betraying the ideals I thought I lived by.”

How come? Evidently, he could tell that these three public schools were bad schools infested by bad teachers.

Yet, how could he divine that from driving by? Guggenheim doesn’t mention the names of these bad schools, but here’s a picture of one school in Venice: Broadway Elementary. It looks okay, but if you drove by at recess, you’d notice the student body is about 80 percent Hispanic and 15 percent black. (Interestingly, Broadway is switching to a ”Mandarin immersion” program, perhaps in pursuit of higher-scoring students.) The Three Bads Theory lets liberal parents rationalize their white flight by publicly blaming teachers while they privately shun black and Latino students.

Let me add a few notes: Davis Guggenheim, who won the Best Documentary Oscar for directing Al Gore's global warming movie An Inconvenient Truth, has three children with his wife, actress Elizabeth Shue, who was Oscar-nominated for Leaving Las Vegas and is the daughter of a Fortune 500 CEO. (Here she is in a 1984 Burger King commercial.)

Davis Guggenheim is the son of Charles Guggenheim, who won two Best Documentary Oscars. The Hollywood Guggenheims are only "distant relations" of the New York Guggenheims of Guggenheim Museum fame, but in any case "Guggenheim" is perhaps the grandest name in American German-Jewish culture, the American equivalent of "Rothschild."

It's like when Barack Obama was asked yesterday why he sends his kids to Sidwell Friends instead of to the neighborhood public school for 1600 Pennsylvania Ave. and he implied that he would send them to public school if only they were good schools.

Sure, Barack. Nobody ever replies, "Hey, I'm rich from book sales. (Don't forget to pick up a few copies of my upcoming children's book, which will be on store shelves for the Christmas rush!) My wife and I have three Ivy League degrees. What do you think we should spend my money on instead of on our children?"