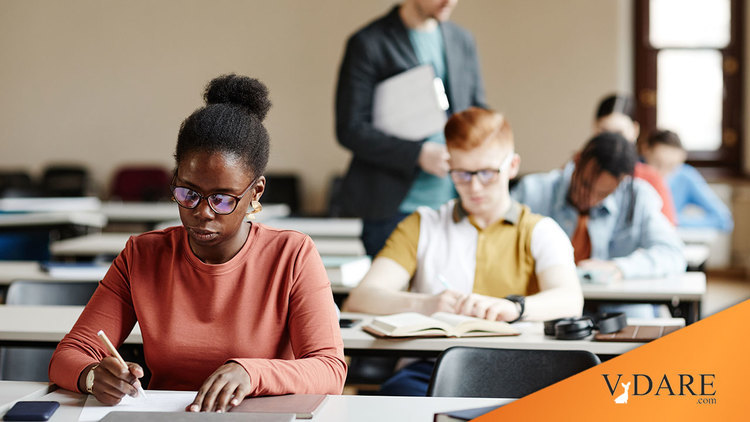 It's perfectly true that as Steve Sailer says below, that the "test gap" between Non-Asian Minorities and whites is not the fault of teachers. Sailer says that some liberals believe that

"the cause of the achievement gap is bad schools, which are the fault of bad teachers, who are protected from termination by bad teachers' unions. Why do so many liberals swear by what the Chinese might call the Three Bads Theory?"

OF course, those are centrist liberal—unreconstructed liberals think that the problem is that we're not giving the bad schools, bad teachers, and bad teachers unions enough money. Because of racism. Diane Ravitch made the same point recently about the No Child Left Behind Act—that you shouldn't blame teachers for under-performing students. And yet...there are bad schools, bad teachers and worse teachers' unions. Peter Brimelow wrote whole book about the NEA, and the DC teachers union is worse. Reforming them wouldn't close the test gap, because any reform would help whites and Asians as much or more than it would minorities, but in terms of public education spending it's actually the white and Asian kids who are being left behind. There are all these programs to help dumb kids, but nothing to help smart kids. In 1994, Peter Brimelow wrote in Forbes

"WOULD ANY management worth a damn put most of its dollars into its weakest divisions and starve the promising ones of capital? Not and live for long. But that's just what the U.S. is doing in education."[Disadvantaging the Advantaged, November 21, 1994 ]

He pointed out that in the 90's

"Some 70% of federal spending on elementary and secondary education goes to the disadvantaged and handicapped. Adding bilingual and vocational programs takes the share above 80%. By contrast, the "Javits Gifted and Talented Students Education Program," the sole federal program focused on brighter children, only began in 1989. Its share of federal elementary and secondary funding: never more than one-tenth of 1%."

This reminds me of a story William F. Buckley told about Sir Arnold Lunn:

The Latin Mass Committee petitioned for the resumption of a single mass to be said in Latin in London after the postconciliar ban of 1965, and was turned down - on the ground that Latin was only ''for the educated few.'' Sir Arnold Lunn said it all in a letter to The Times, ''Surely,'' he wrote, ''in all her charity, Mother Church can make a little room, even for the educated few?''

Well, if even if the Church can't, it would be nice if the American education system could.