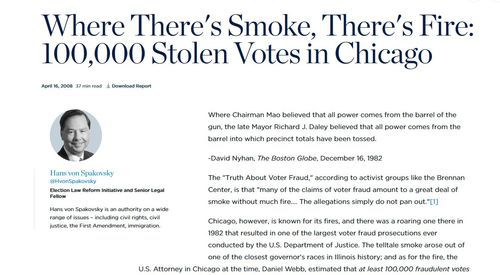 You don’t hear much about the 1982 Illinois gubernatorial election vote count, both because it was hilariously crooked (which is something you are not supposed to think about) and it was extremely confusing. I think I’ve finally got a coherent story straight in my head, thanks to:

The 1982 election for governor of Illinois was between Republican incumbent Big Jim Thompson (Boys Town, Chicago) and aristocrat Democratic Senator Adlai Stevenson III. Thompson was up in all the polls, but the election turned out to be strangely close.

After a lengthy count, Thompson was up by only a couple of hundred votes. But then, remarkably, Republican DuPage County delivered some overlooked ballots, and the Republican had won by a little over 5,000 votes.

My recollection at the time watching the local news in Chicago, where I had just moved, was that this was a mirror image of reporter Theodore White’s tale in his autobiography of watching the famous 1960 presidential vote count with JFK’s fixers at Hyannisport. Illinois was basically tied between Kennedy and Nixon, until finally some downstate precincts came in and Nixon took the lead. White, a Kennedy partisan, was crushed, but JFK’s insiders were instead ecstatic. Those Republican wimp bosses, they explained to the naive White, couldn’t take the pressure and had laid their cards on the table first. So Mayor Daley now knew exactly how many votes his precincts had to deliver. JFK would be President.

What gets confusing in the 1982 story is that at this point, unlike Nixon in 1960, poor Adlai III was outraged by this palpable perfidy by the other party. So Stevenson demanded a recount and an investigation into vote fraud, apparently not grasping that the reason the final tally had been close in the first place was because of all the fast work by his Democratic operatives in Cook County.

Stevenson claimed there was evidence of voter fraud in areas of the state outside of Chicago. Although those claims “did not pan out,” it was clear that “the prospect of a close [judicial] look at the conduct of voting in Chicago did not please many of Chicago’s Democratic kingpins, already under pressure because of the federal [criminal] investigation of charges of vote fraud in the [1982] election.…” For that reason, “many committeemen privately had expressed a hope that Stevenson would lose his bid for a recount.”

The boys in the back rooms wanted Stevenson, whose great-grandfather had been Vice President, to ix-nay on all his calls for a full inquiry into voting irregularities. The recount controversy dragged on for months, with Stevenson finally conceding three days before Thompson was sworn in in January. But then the investigations went on for a long time.

The investigation proved a net disaster for Stevenson’s Democrats, with 63 Democratic workers in Cook County being convicted. (I have a vague memory of reading somewhere that 5 GOP staffers in DuPage County went down as well, but I’ve never been able to confirm that.)

Here’s some local color that turned up:

In its reporting, the Chicago Tribune discovered that the supposed home address of three voters in the 17th Precinct of the 27th Ward was a vacant lot. The paper also discovered that votes had been cast for seven residents of a nursing home who denied having voted-their signatures on the ballot applications were all forgeries. In fact, one resident had no fingers or thumbs with which to write a sig­nature.[12] The fraud was so blatant that the resident without fingers or thumbs “was counted as having voted twice by the end of the day.”[13] Not surpris­ingly, Stevenson easily won the 17th Precinct, by a margin of 282 to 30.