Vigilantes In The California Legislature? Yeah, I Wish!

A group of Republican lawmakers in California has put together a task force to conduct a series of townhall meetings about illegal immigration in Los Angeles and San Francisco.

Yes, a move very similar to what Republicans in the House have done this summer.

Assemblyman Chuck DeVore (R-Irvine) is heading up the group—you might remember him as the wonderful man who protested Vicente Fox's visit to the Legislature a few months back.

Assembly Speaker Fabian Nunez has his panties in a bunch (of course) and has taken to calling these members "vigilantes"...how original.

Let's have a look-see at what both sides are saying:

"these self-appointed vigilantes are doing exactly what their Republican counterparts in Washington are doing about immigration — pitting Americans against each other instead of taking action." [GOP launches task force against illegal immigration by Steve Geissinger, August 9, 2006]

Hmm...illegal immigrants are costing California taxpayers ten billion dollars a year and all the Assembly Speaker can do about this enormous problem is attack those who would help.

It's been a few years since I left the legislature but it sounds like nothing has changed—the inmates still run the asylum and yes, this means I am calling Speaker Nunez a certifiable nutbag...because he is. 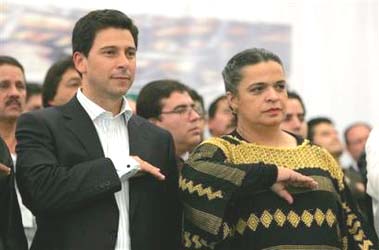 Graphic:California Assembly Speaker Fabian Nunez, left, salutes towards the [Mexican ] flag while listening to the [Mexican ] national anthem as he stands with Beatriz Paredes, who hopes to become the candidate for Mexico City Mayor under her party, the Institutional Revolutionary Party, or PRI, in Mexico City, Mexico on Friday Aug. 26, 2005.