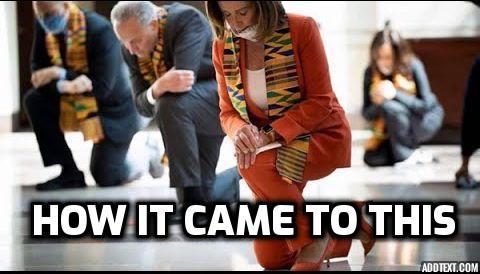 Video: How It Came to This

Jared Taylor of American Renaissance has a great video called "How It Came To This".

See it on Bitchute.

What is the source of this madness?

How did it come to this? And by “this” I mean not just the 10 days of rioting after the death of George Floyd, but the psychological collapse of whites that followed. Billions of dollars in riot damage can be repaired; the psychological damage is more serious. Consider this. [0:00 – 0:30] This young couples agreed to lick the boots of blacks. [0:00 – 0:18] This woman does the same. [[00:42 – 1:02] I don’t believe there has ever been a time in the history of the world when a black person could persuade a white person — just passing by — to get on her knees, right on the side walk.

There was a similar, maybe not quite so degrading ceremony in Congress. Speaker Nancy Pelosi and Senator Charles Schumer stayed on their knees for nine minutes to honor George Floyd. They wore African kinte cloth and bowed their heads. George Floyd was a criminal with a long record. If American senators and congresswomen have ever knelt like this to honor another American, I haven’t heard of it. Not George Washington, not John Kennedy, not anybody. Have they ever even knelt on the cold, hard floors of Congress to worship God? I doubt it.

When a nation is defeated, it pays tribute. America has been defeated. Looters pillaged Apple stores all over the country. Apple’s reaction? It promised $100 million for black causes. Here are blacks looting ritzy stores in Beverly Hills and Santa Monica. I’m sure that like virtually every major corporation in America they have also promised to pay tribute. Do you think that after the race riots of the 1960s or even the LA riots of 1992, businesses rewarded the people who sacked their stores. No. This is a new era. [0:30 – 0:56]

What is behind this unprecedented surrender? A delusion — I would even call it a kind of madness. It’s the belief that the United States is viciously racist. “Here is a headline from the Guardian: “In America, Black Deaths Are Not a Flaw in the System. They Are the System.” It’s now common on the left to think that blacks are treated so horribly that they are justified in rioting, and that anyone who opposes looting and arson is a racist. Joyce Kenner has been the principal of Whitney Young High School in Chicago for 25 years and worked for Al Sharpton before that. Here she is with her arm raised at a school event. When she urged her students to demonstrate but stay away from violence and looting, “disappointed alumni” got up more than 800 petitions calling for her to resign.

David Shor was a data analyst for Civis Analytics. His job was to try to help Democrats win elections. He tweeted a reference to a paper that found that in 1968, when there were race riots, it raised the Republican share of the vote. He was worried that the George Floyd riots might make people vote Republican this year. Work colleagues and clients said this was anti-black and “threatened their safety.” Mr. Shor apologized, but “Civis Analytics undertook a review of the episode. A few days later, Shor was fired.”

This is new. A certified anti-racist was fired for pointing out that looting and arson might hurt Democrats.

Shor was right, of course, about the riots of 1968. They elected Richard Nixon, who was reelected in 1972, and served until he was removed by the same kind of Deep State conspiracy that Trump has faced.