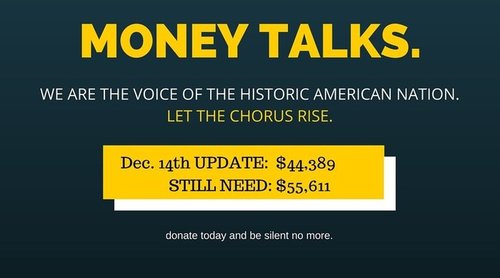 Last year at the Donor Appreciation Christmas Party that VDARE.com hosted in New York, I repeated a theme I’d been brooding about for a while: miracles happen quite often in politics.

They happen in private life too. This picture captures both: my wonderful young wife Lydia, Chief Advancement Office a.k.a. FUNDRAISER for VDARE.com, snapping Donald J. Trump at his recent rally in Worcester MA. 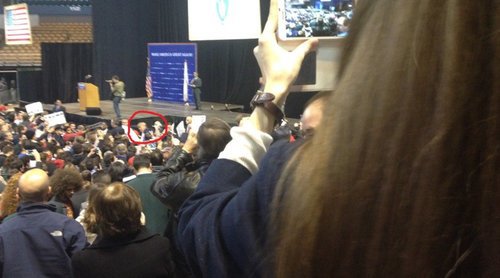 I have to admit that when VDARE.com’s Matthew Richer predicted back in April that Donald Trump would run for President—and run on the patriotic immigration reform issue—I was…a little skeptical. After all, it’s been a long time, over TWENTY THREE years, since I wrote my National Review cover story Time To Rethink Immigration? And twenty years since I wrote my book, Alien Nation: Common Sense About America’s Immigration Disaster. I’ve been waiting for the other boot to drop for A LONG TIME.

But Richer was right. (He now predicts that Trump will sweep New England by opposing the “refugee” racket.)

And it’s not just Trump. Several other former and current candidates for the GOP presidential nomination, including Wisconsin Governor Scott Walker (I have a soft spot for Walker because he actually implemented a number of proposals about the Teacher Trust that I made in my 2003 education book Worm In The Apple) and most significantly Ted Cruz, have moved in an immigration patriot direction. Cruz has even broken with the illegal-bad/legal-good game that so many donor-dominated politicians try to play, even when the politicians themselves are knowledgeable on the National Question. It’s about time!

How has this happened?

I believe that an important point was made, no doubt inadvertently, by an MSM writer called David Roberts in his article on the Left-fashionable website VOX.com, The real reason the media is rising up against Donald Trump (December 1).

Roberts Left-speak requires a certain amount of translation, but this is the key point: he thinks Trump has been able to defy the immigration-enthusiast Main Stream Media because of

the development of a parallel intellectual infrastructure, a network of partisan think tanks, advocacy organizations, and media outlets that provide a kind of full-spectrum alternative to the mainstream….the establishment media has largely proven feckless in the face of this assault…Now there are so many outlets, so many voices, that the old guard has very little control over the narrative.

Not just us, of course, but importantly us. We are a new form of media, outside the corporate/ advertiser-subservient, Leftist-infested Main Stream Media,

It’s hard to keep up with him—but there’s nothing that VDARE.com hasn’t discussed and documented in over the last 16 years.

VDARE.com’s role is to provide (hyperlinked, documented) facts and analyses about America’s immigration disaster that you are not going to see in the Main Stream Media. We believe that the truth shall make you free.

But we can only do this with your help.

This year at the VDARE.com Donor Appreciation Christmas Party (we had carolers who sang Christmas carols!) I celebrated the Trump miracle—but I also said that it’s important to realize, even if he is disapparated (and they’re working on it!), that the point he has personified will remain.

Americans clearly realize that, whatever their politicians and Main Stream Media enforcers say, immigration is an existential threat to them—and to their children.

Help us keep that realization alive! Give generously now!

I will personally be most grateful.