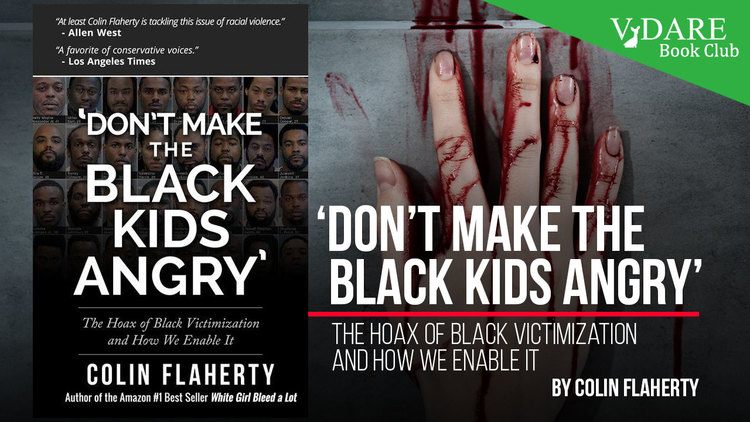 ["Rest In Peace, Big Man." Colin Flaherty And Black Crime—The Biggest Lie Of Our Generation, by "A Southerner," January 20, 2022]

The late Colin Flaherty had a far larger impact on mainstream discourse than any journalist will ever be willing to admit. He was one of those rare creatures, an actual reporter. Developing a nationwide network of people who tracked the crimes that the Main Stream Media was desperate to cover up, he had a massive presence on YouTube and social media, at least until he was censored. Even afterward, Flaherty's followers would spread his findings, building something close to an entire subculture.

The strength of this underground phenomenon came about because of a simple, unfortunate truth. This is that almost every American has a story about black crime or the ways high crime rates in "diverse" cities have changed our lives. Many of us had parents or grandparents who lived in great American cities that never recovered from the historic crime wave of the late 1960s and the so-called civil rights movement. Many more have left cities recently because of the rise in crime after the MSM promoted Black Lives Matter.

When we pay high taxes, when we endure a long commute, when we move to expensive neighborhoods with "low crime" and "good schools," when we hold our tongues in the face of obvious lies because we fear violence, and when we do anything else to simply build a barrier between ourselves and black crime, we are seeing the true cost of diversity. It has destroyed this country. There are vast swathes of Baltimore, East St. Louis, Detroit and countless other cities that are probably more dangerous than Mariupol. While the federal government meddles overseas, it has enabled the destruction of our homeland. It's also failed the countless victims of all races who suffer from black criminality that is excused by the MSM.

Colin Flaherty was a voice for those victims. His book Don't Make the Black Kids Angry: The Hoax of Black Victimization and Those Who Enable It gets to the question of why black crime is such a problem in this country. It's an issue far more important to ordinary Americans than the geopolitics of eastern Europe or the Middle East. We miss his crucial voice on this issue and we miss him as a person. Yet his legacy lives on. Don't Make the Black Kids Angry will be the next selection for the VDARE.com Book Club.