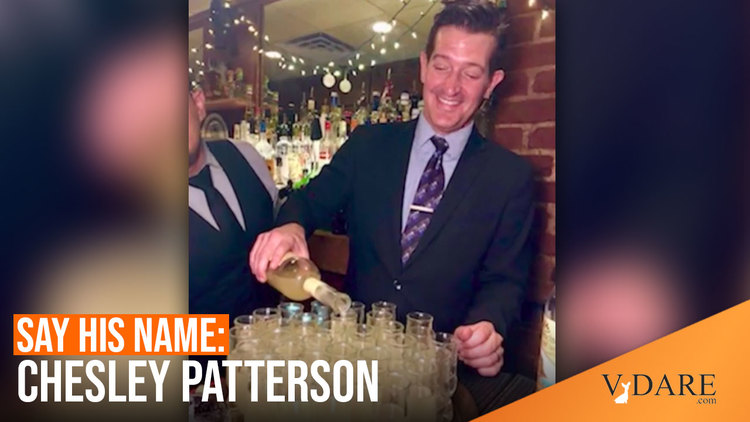 If you have paid attention to what’s happening across America over the past decade, you know the pendulum across not just this nation, but the entire Western world, is on the verge of swinging back. What started with the election of Donald Trump in 2016 was momentarily stopped.

All over America, good people know something is wrong. That anger, that righteous indignation is rising.

As Flaherty told me many times, those who withhold the truth and fuel the anti-white resentment driving violent crime deserve what is coming to them.

It was another vigil with more candles burning in Baltimore – the familiar light that glows at gatherings seen so many times before across the city.

The Little Italy community is mourning the loss of one of their own. La Scala Ristorante Italianio’s General Manager Chesley Patterson was killed in Fells Point just after midnight on Monday. Tonight — friends, family, and community members gathered to grieve together. pic.twitter.com/P3PKWq6mtf

This time they gathered outside the La Scala restaurant, where Patterson was general manager. He was shot and killed just after midnight Monday in Fells Point.

“To see his life taken like this, I mean, why? For what?” one man said at the vigil, fighting back tears.

“He’s gone forever and I’m sure the people who did it didn’t give one crap about him. So, he’s gone,” said a woman amid the crowd.

Patterson’s murder, which was caught on surveillance video obtained by FOX45 News, comes at a time when two other unsuspecting city residents were caught up in the continuing surge of gun violence seen across the city – including James Blue who was fatally shot Tuesday outside a home on Walker Avenue in northeast Baltimore. He was the 43-year-old husband of a Baltimore City police lieutenant and father of three children.

At the vigil, there was frustration over the crimes.

“Yes, I’m pissed off about Chesley getting killed for no reason. But the reason I’m pissed off about him is because I know him, he was close to my heart,” said Nino Germano, owner of La Scala. “But there are a lot of good people that get killed every day. If you don’t start doing something about that, [it will push] us out the city,” he added.

Frustration also brewed over Mayor Brandon Scott’s absence from the vigil. Residents wanted to hear from him about his crime plan. Scott was invited but did not attend.

But city councilman Zeke Cohen, who represents that district, did attend.

FOX45 pressed Cohen about the crime, wanting to know what he’s doing about it.

Cohen reminded us that all city leaders must push forward and make sure the mayor is implementing his plan. But when asked about the concerns of some residents who feel that plan is not working, Cohen said they’ve got to make sure it does and “hold that plan accountable.”

His name is Chesley Patterson, a white man murdered by an as yet unidentified black male in nearly 75% black Baltimore.

It’s on the tip of everyone’s tongue.

Across the United States of America and the Western world, hundreds of millions of people lack the ability to verbalize it yet. But it’s on the tip of our tongues.

It just needs a name.

We are on the precipice of an idea whose time has come.