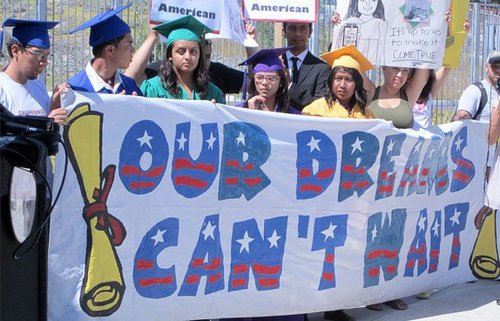 Above, demanding DREAMer kiddies pretend to be scholarly in graduation outfits, though Hispanics are school dropout champs.

Failed election consultant Karl Rove is still showing up on Fox News to condemn immigration enforcement. On Wednesday, he was energetic during his Trump bashing, stooping to the la Raza argument that illegal alien valedictorians should not be deported, even though Mexico etc. needs them more than we do.

So Karl Rove had his little whiteboard, with a poll showing that half of Republicans prefer a system of legalization as long as there are requirements for the illegals. Of course, those prerequisites would never happen; instead, the millions of future Democrats would be rubber-stamped into voter-hood, as has happened previously in Clinton’s Citizenship USA program.

And Rove actually used the Raza meme of alien valedictorians, though Hispanic academic achievers are the exception and not the rule.

ROVE: Thirty-one percent said deport them all. Now my suspicion is that 31% would be a smaller number if you attach to it what Mr. Trump also says which is that you take children of illegal aliens who were born in the United States and you ship them out of the country as well with their families — you know, they have constitutional right under the Fourteenth Amendment to US citizenship, having been born on US soil, and I think you know we’d have a lot of stories of, you know, you know, here in Texas there was a series of stories about valedictorians of our high schools who would be forced to leave …