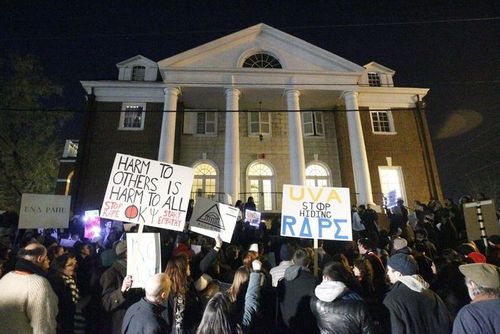 RICHMOND, Va. (AP) — The fraternity that was the focus of a debunked Rolling Stone article about a gang rape filed a $25 million lawsuit against the magazine Monday, saying the piece made the frat and its members “the object of an avalanche of condemnation worldwide.”

The complaint, filed in Charlottesville Circuit Court, also names Sabrina Rubin Erdely as a defendant. It is the third filed in response to the November 2014 article entitled “A Rape on Campus: A Brutal Assault and Struggle for Justice at UVA.” Three individual fraternity members and recent graduates are suing for at least $225,000 each, and a university associate dean who claims she was portrayed as the “chief villain” is suing the magazine for more than $7.5 million. …

However, details in the lengthy narrative did not hold up under scrutiny by other media organizations. For example, Phi Kappa Psi did not host any social event at its house on the day of the alleged gang rape as the article claimed. Additional discrepancies led Rolling Stone to commission an examination by the Columbia University Graduate School of Journalism, which said in a blistering report that Rolling Stone failed at virtually every step, from the reporting by Erdely to an editing process that included high-ranking staffers.

According to Google News, the words “Haven Monahan” do not appear in any articles about this lawsuit anywhere in the news media today.