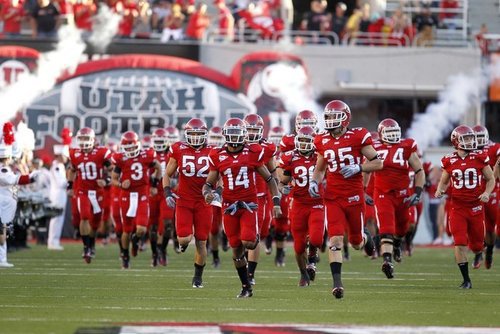 The U. of Utah’s college football team is 6-0 and is in position to be in the post-season playoff. For example, earlier in the season they scored a touchdown on an undefended punt return by putting two returners back and having one fake as if he were waiting to catch a high deep punt to the right, while the other returner nabbed what was actually a mediocre punt to the left and sprinted unnoticed down the sideline.

One way Utah is trying to make it to the post-season it is by revolutionizing special teams (punts, kickoffs, and kicks) plays.

On the other hand, football coaches are cautious and conservative and don’t like taking chances. Coaches prefer to recruit the best athletes and stick to the traditions when it comes to risky plays.

But Utah, unlike Alabama, is never going to be the first choice of homeboys who are the best athletes.

In recent years, Stanford, with all the money in the world, has been trying to build a strong football program by applying the Duke basketball strategy to football: recruit 3-digit IQ star athletes like Toby Gerhart, Andrew Luck, and Christian McCaffrey. Why not go to Stanford?

Utah doesn’t have Stanford’s advantages, so it’s trying something more challenging in football by trying new wrinkles in special teams play. Black high schools notoriously pay little attention to kicking the football. In contrast, my old high school Notre Dame of Sherman Oaks, California built itself into a football powerhouse on the strong right leg of Chris Sailer a couple of decades ago. The other Sailer went on to more or less invent the profession of placekicking tutor.

Over the decades, white kids have gotten extremely accurate at soccer-style placekicking in football. But now Utah is trying to extend this tradition of innovation to the other aspects of special teams play such as punting, punt returns, and kickoff returns.

But on Saturday Utah’s high risk special teams strategy almost crashed and burned their season. The Utes’ special teams gave up three scores, including a comic safety on a kickoff return where one returner threw a forward pass to the other returner in the end zone (which ain’t allowed). But Utah still beat Arizona State 34-18.

Probably the most enduring influence of what Utah has been trying will be not the trick plays, but Utah’s Melbourne-born punter Tom Hackett.

Australian Rules football is a big time professional sport in one of the world’s big time sports countries, and the game is centered around punting. So, the best athletes focus on punting, and they tend to be more athletic about punting. Instead of mechanically punting the same way every times, Aussie Rules players are used to punting off the run and in a variety of trajectories and spins.

By luck, last year I happened to be given two tickets to the UCLA-Utah game at the Rose Bowl where I was stunned by the performance put on by Utah’s Australian Rules punter Tom Hackett, so I’ve been paying attention to the rise of Utah’s special teams for a year now:

What I Really Meant About the Future of Punting