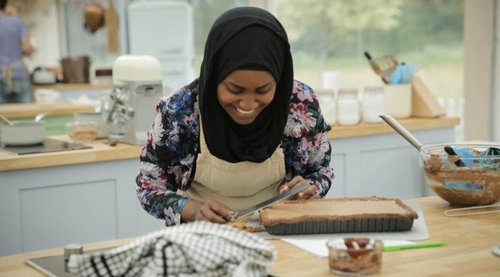 NOT Another Great Moment in Muslim Achievement

First, a Muslim youth in Texas invented the clock. Second, a Muslim woman in Britain invented baking. Third, well, apparently there is no third yet, so the New York Times is taking us back to second again:

… That prize went to a BBC television competition called “The Great British Bake Off,” staged in a large white tent, whose winner turned out to be a 30-year-old Muslim descendant of Bangladeshi immigrants named Nadiya Jamir Hussain.

The fact that Ms. Hussain wore a black head scarf as she baked her way to a victory watched by 14.5 million people underscored the precarious balance of British society, as the xenophobic right questions the loyalties of British Muslims and seeks to conflate Islam with migrants seeking a free ride on welfare, or with the terrorists of the Islamic State.

Ms. Hussain, said the columnist Yasmin Alibhai-Brown, herself an immigrant of South Asian descent from Uganda, had taught the nation “what it is to be British in 2015.”

And then there’s some stuff in this op-ed about how if Britain weren’t so xenophobic and immigration restrictionist it would have won the big rugby tournament.

If you are a patriotic sports fan, you should demand open borders. What’s more important in this life than being able to hold up a giant foam Number One souvenir in salute to the hired gladiators said to represent you?