The left’s project to rejigger the language according to its political agenda continues to pick up steam with the mainstream media which is on board. The latest symptom is USA Today falling in line with the Associated Press decision to drop the phrase “illegal immigrant” from its Stylebook of usage. 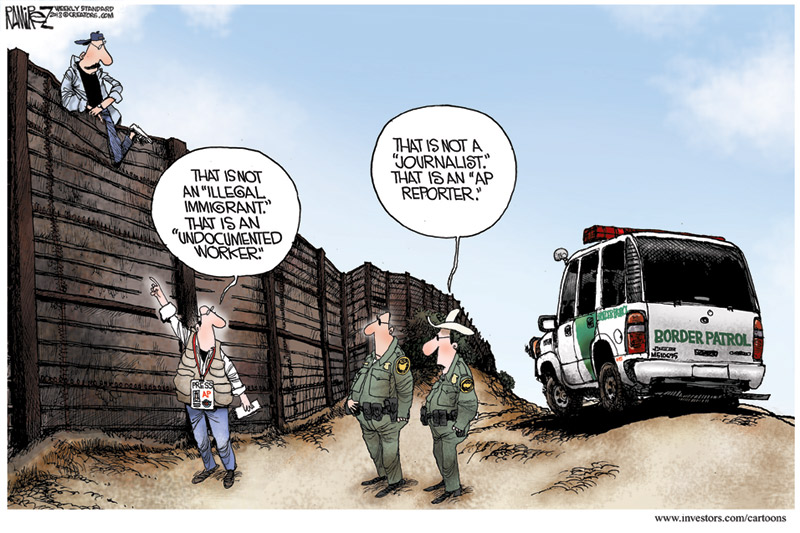 The campaign to censor the phrase “illegal immigrant” has been going on since at least 2010. The following clip of Tucker Carlson’s comments is date Dec 28, 2010.

Here are a few examples of redefining reality for political reasons:

• The assault by invasive Muslims on the facts which appear in the news has been acute. Critics of hostile Islam and its daily murders in the name of Allah are said to display Islamophobia, as if recognition of a profound threat to our way of life is a mental disorder. The encroachment of sharia speech restrictions as part of the left’s wide-ranging agenda of political correctness is a huge danger to our liberty. The recent sale of Al Gore’s CurrentTV network to Al Jazziera will certainly bring a more positive view of Islam to American viewers.

Plus, the recent banning of the word “Islamist” by AP is a bad sign. The word was used to designate sharia-pushing jihadists and differentiate them from their less-bloodthirsty brethren. But CAIR complained about negative words referring to Islam, so AP folded like a cheap lawn chair.

• “Gay marriage” is a political creation to poke conservatives in the eye. Almost no one objected to domestic partnerships for gay couples. But dragging in the institution of marriage was perfect for bashing religious people who have strongly felt beliefs about the meaning of marriage. The idea of gay marriage is gaining traction, a tribute to the propaganda skills of the left and its partners in the press, even though this so-called “human right” was never discussed 30 years ago.

Watch for “marriage equality” to expand soon to include polygamy, one of the most misogynous practices ever.

• The much-promoted idea that “Diversity is our strength” is a denial of human nature, which is deeply tribal. People normally prefer the comfort and safety of their own cultural group. Media and schools promote diversity as a plus precisely because it is unnatural not to see a foreign tribe as a danger. Group identity is hard wired in our species.

The censorship of “illegal immigrant” is designed to blur the idea of illegal alien foreigners stealing American jobs. The press wants us to see them as family people who moved to the United States in search of a better life, no big deal even with 20 million citizens unable to find full time work and 90 million out of the labor force in the current jobless “recovery.”

Another news organization has revised its editorial style on immigration terminology. USA Today, according to a memo obtained by Jim Romenesko, will stop using the term “illegal immigrant” unless it is used in a direct quote.

“The term illegal immigration is acceptable, but do not label people as illegal immigrants, except in direct quotes,” William Coon wrote in a memo to staff Wednesday evening. “Undocumented immigrant, undocumented worker and unauthorized immigrant are acceptable terms — depending on accuracy, clarity and context — for foreign nationals who are in the country illegally. An alternative is to use a phrase such as “people who entered the U.S. illegally” or “living in the country without legal permission.”

USA Today’s decision comes on the heels of a similar move by the Associated Press, which dropped the phrase from its stylebook earlier this month.