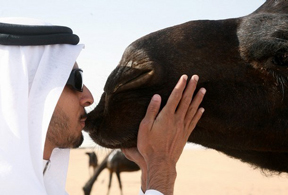 The sale of Al Gore’s Current TV network to Al Jazeera has stirred up quite a bit of criticism, in particular from conservative observers, noting the hypocrisy of the green guru grabbing $100 million in money made from the oil industry.

But Gore has also disgusted liberal environmental allies, repelled for the same reason:

Yesterday morning, the still shell shocked staff at Current TV was called to an all hands staff meeting at its San Francisco headquarters, which was teleconferenced to their offices in LA and NYC, to meet their new bosses.

That would be two of Al Jazeera’s top guys: Ehab Al Shihabi, executive director of international operations, and Muftah AlSuwaidan, general manager of the London bureau.

Ominously missing was the creator of Current, the self proclaimed inventor of the Internet and savior of clean energy, Al Gore, although his partner, Joel Hyatt, stood proudly with the Al Jazeera honchos.

“Of course Al didn’t show up,” said one high placed Current staffer. “He has no credibility.

“He’s supposed to be the face of clean energy and just sold [the channel] to very big oil, the emir of Qatar! Current never even took big oil advertising—and Al Gore, that bulls***ter sells to the emir?” [. . .]

Former Vice President Gore has shown that the only green he really admires is the sort that fits in wallets.

What did Al Jazeera get for its $500 million purchase price? Current TV has been getting miserable ratings, averaging about 42,000 prime-time viewers last quarter. But the network does have its camel nose under the tent in terms of access to many American households and hopes to expand that admittance somehow.

Plus, Al Jazeera has also bought a degree of respectability by purchasing the network partially owned by a former Vice President of the United States. The hefty price tag makes no sense otherwise. And Jazeera needs a major makeover after years of being “the most powerful voice of the Muslim Brotherhood”.

But what kind of programming does AJ present?

One recent report was less than friendly to America, alleging that hate-crime violence against Muslims is “spiraling out of control.”

But what spreader of the myth of Islamophobia wants to hear facts? The terrorist-connected Council on American Islamic Relations (CAIR) urges any Muslim who “feels” he is has experienced a hate crime should contact the organization ASAP to add to the victim stats.

Furthermore, Al Jazeera’s list of horrors is bogus. At the top of the story is a photo of Mona Eltahawy, a Muslim activist who vandalized a political poster in a New York subway station (my choice of picture is shown below), and who was arrested (!) for destroying private property. Eltahawy is a diverse immigrant from Egypt and hasn’t yet learned that the First Amendment protects free speech.

Given Mona’s carefully curious color co-ordination, the attentive observer must conclude the action was a stunt designed to create publicity: she wore a pink coat and used pink spray paint to deface the anti-jihad poster she disliked. Unserious. 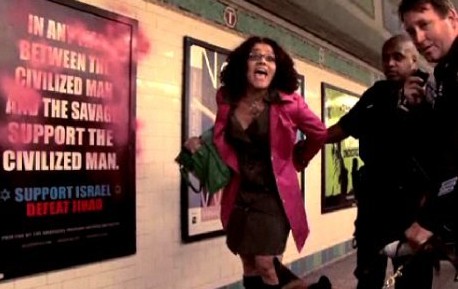 But to Al Jazeera, the arrest was a hate crime. They have a lot to learn about America and its Constitution.

AJ’s text begins with a slanted retelling of the terrible subway killing of a Middle-Eastern-looking man (an Indian actually), pushed in front of a train by a crazy person who said she has hated Muslims since 9/11. The state of mental health treatment in this country really is shameful, but Jazeera chose to create a hate climate scenario based on this crime.

The piece then goes on to paint instances of murdered storekeepers as hate crimes, even though the occupation is one of the more dangerous.

But if Al Jazeera wants to paint America as a place where Muslims are unwelcome, that’s not a bad thing. If thousands of Muslims read this article and decide not to immigrate to the USA, then it’s great. Jazeera can continue to lie about what a meanie society the US is as long as that belief keeps the Muslims at home in dar al-Islam.

Whatever the long-term outcome of the Jazeerafication of cable TV, Al Gore is laughing all the way to the bank.

On the evening of December 27, an Indian immigrant to America named Sunando Sen was pushed by a stranger onto the subway tracks in New York City and struck and killed by an oncoming train. Sen had called New York home for years, and after years of hard work and struggle had recently managed to achieve his lifelong goal of opening a small business of his own, a copy shop in Upper Manhattan.

His roommate, MD Khan expressed shock at the death of his friend, a soft spoken man who liked to stay up late watching comedy shows and listening to music: “He was so nice, gentle and quiet… It’s broken my heart.”

The following day, the NYPD announced the arrest of Erika Menendez, a 31-year-old woman who had been spotted on security footage fleeing the scene after Sen had been pushed. Upon being detained and taken to a 112th Precinct police station for questioning, Menendez confessed to Sen’s murder and revealed as her motivation a desire to commit violence against Muslims. As she told detectives:

“I pushed a Muslim off the train tracks because I hate Hindus and Muslims… Ever since 2001 when they put down the Twin Towers, I’ve been beating them up.”

Sunando Sen was not a Muslim, but as a brown-skinned foreigner living in the United States, he was targeted and killed in an act of hate which is the by-product of an ongoing campaign of bigotry and demonisation against Muslims living in America.

Muslim-Americans, as well as Hindus, Sikhs and others who purportedly “look Muslim” have been humiliated, assaulted and in many cases murdered by individuals often galvanised to violence by politicians and media figures who have enthusiastically engaged in public hatemongering against the Muslim community in the country.

Anti-Muslim violence increases
The 9/11 attacks precipitated a surge in hate crimes, but even as the events themselves recede further into history, the level of hatred and violence directed at Muslim communities is paradoxically increasing. Within the past month, in New York alone, police have suspected racial hatred as being the motive behind several crimes.

This includes a string of murders specifically targeting Middle Eastern storekeepers in Brooklyn, the last of whom, a 78-year old Iranian immigrant named Rahmatollah Vahidipour, was shot to death while closing his boutique and whose lifeless body was then dragged to a backroom and covered over with merchandise from his store.

Within the same week as Vahidipour’s murder another Muslim man was viciously beaten by two men who preceded their attack by asking him whether he was “a Hindu or a Muslim”, while another man was stabbed several times outside of a mosque in a random attack by an assailant who screamed “I’m going to kill you Muslim”, while repeatedly plunging a knife into his victims’ body.

Far from being aberrations, these incidents are in line with national statistics which show anti-Muslim violence in America nearing record highs, a trend which comes in tandem with highly public campaigns against mosque construction as well as fear-mongering by politicians and media figures regarding alleged plots by Muslim-Americans to override the constitution and impose Islamic law on the country.

The US election cycle also saw Muslims used as convenient targets for politicians seeking office, with one example being incumbent Illinois House of Representatives Republican Joe Walsh who told a cheering crowd at a campaign rally that “Muslims are here trying to kill Americans everyday”, before making a baseless and highly incendiary claim that radical Islam had “infiltrated” the Chicago suburbs and that Muslims there were planning an attack that would “make 9/11 look like child’s play”.

While working the crowd into hysterics was a convenient campaign strategy for Walsh, just days later the Muslim community experienced the consequences of his rhetoric. A man opened fire on an Illinois mosque while it was packed with hundreds of congregants for Ramadan. The next day, another mosque was hit with an acid bomb thrown at a window while worshippers had gathered for night services.

Despite these attacks against Illinois Muslims in the wake of his statements, Walsh steadfastly refused to apologise for his rhetoric demonising the Muslim-Americans and instead doubled-down on his blanket accusations against them, a reflection of the mainstream acceptability of anti-Muslim rhetoric by political figures in the US today.

Indeed the use of Muslims as a punching bag by opportunistic politicians seeking a minority group to scapegoat has become a regular feature of American political life which shows no signs of abating, despite the “trickle-down” effect by which this bigotry is now manifesting itself in real violence against innocent Muslim-Americans on a regular basis.

Behind this hatemongering lies a deep cynicism, as leading anti-Muslim politicians such as Newt Gingrich who have warned of “stealth jihad” and other nefarious plots by Muslims in America were within recent years helping facilitate Sharia-compliant finance programmes in the country and who maintained notably cordial relations swith prominent Muslim leaders.

Political hatemongering
With Muslim-bashing becoming politically fashionable in recent years, politicians such as Gingrich have markedly changed their tune and it has been to the detriment of Muslim-Americans, as well as to the general level of social cohesion and tolerance in the country.

In addition to political hatemongering, the past several years have seen a highly organised and well-funded group of anti-Muslim activists who have been sponsoring campaigns targeting Muslims across the country.

Leading figures in this movement such as Pamela Geller and Robert Spencer have led a crusade to vilify Muslims throughout the country and to exclude them from public life through campaigns of smears and hate-mongering which have cast Muslim-Americans as an insidious fifth column within the country.

Their views have gotten considerable popular attention, and thanks to a documented network of funders and media associates they have managed to bring their message to people across the United States.

In the past few months, a major controversy erupted when Geller’s anti-Muslim organisation sponsored the placement of Islamophobic advertisements at major subway stations in New York as well as in other cities across the country.

Some advertisements depicted pictures of the 9/11 attacks with verses from the Quran superimposed, while others called Muslims “savages” and implored people to “fight Jihad”. While the campaign has been challenged by many liberal commentators, including one infamous incident in which Egyptian-American activist Mona Eltahawy was arrested for attempting to cover a sign with pink spray paint, they continue to run across the country and to spread a message of indiscriminate, vitriolic hatred towards Muslim-Americans in a manner unlikely to be tolerated were it to pertain to any other minority group.

While correlation does not necessarily imply causation, the question must be asked – what effect do advertisements such as these have on the psyches’ of people such as Erika Menendez? Was Sunando Sen, a law-abiding, hardworking immigrant who had given his life to achieving the American dream and who was pushed to his death by a woman who “hated Muslims” a direct victim of this campaign of bigotry? That he lost his life on the same subway system which for months has played host to hateful, incendiary advertisements such as Geller’s is a tragic irony but is in many ways the natural result of a national culture of anti-Muslim bigotry that has become mainstream in both politics and popular culture.

The sad, inescapable truth is that Sen will likely not be the last victim of the accelerating phenomena of violence against Muslims in the United States – the only question today is how far into the darkness America must travel before it decides to take a stand against it.