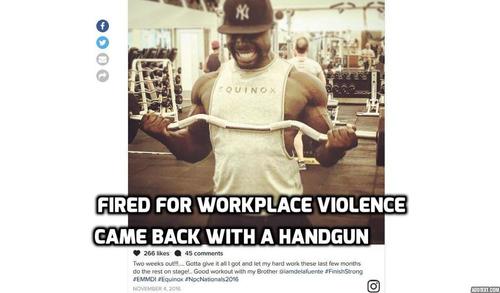 Yesterday's post Equinox Gunman Another “Disgruntled Minority Massacre”–Fired Black Bodybuilder Shoots Employers, Self  identified the late Abeku Wilson, right, as part of a phenomenon called "Disgruntled Minority Massacre" typified by Omar Thornton (who killed eight white men at the brewery where he was fired for stealing)  and Vester Lee Flanagan, news anchor, who shot a white man and white woman on camera. The motive is usually alleged racism on the part of the victims.

The victims are usually white, and that's the case here. CBS reports that the dead are "35-year-old Janine Ackerman of Miami and 42-year-old Marios Hortis of Miami Beach. Ackerman was the gym’s general manager and Hortis the fitness manager."