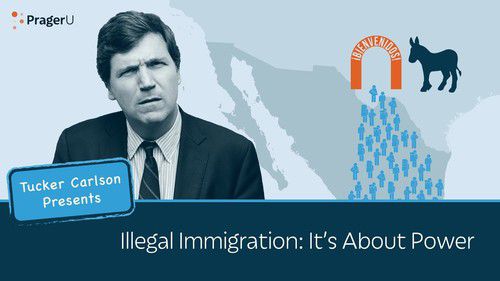 The Fox News host used the Prager University video format to review the disturbing recent history of the Democrat Party — how the one-time friend of the American worker went to permissive globalist to achieve power.

Top leaders like President Bill Clinton and California Governor Jerry Brown have shamefully changed their positions entirely, from protecting American citizens to recruiting foreigners who prefer the big government freebies that Ds provide. Plus a big amnesty from Democrats will leave many recipients feeling grateful at election time.

For example, Cesar Chavez is remembered by the left as an icon, but he acted to keep illegal aliens out of the United States. 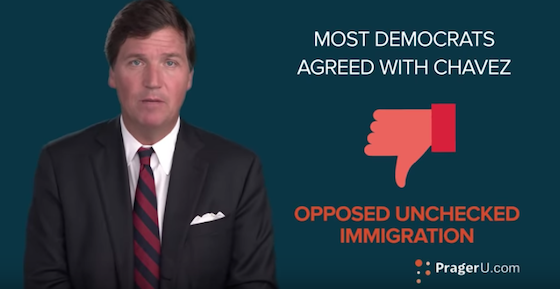 Around 1975, Gov. Jerry Brown objected to a mass influx of refugees because Americans needed help. (Lately not so much.) 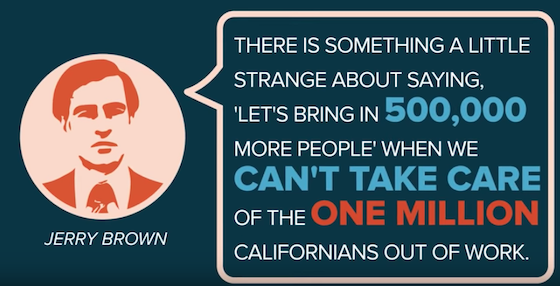 Here’s a transcript of the video, with Tucker Carlson narrating:

I recently watched a group of protestors, most of them young, denouncing President Donald Trump’s immigration policies. They were waving Mexican flags and shouting: “¡Si, se puede!”—”Yes, we can!”

This is now the rallying cry of the open-borders left, but it wasn’t always. In fact, I wondered if a single person at the protest knew where it came from.

The slogan first became famous fifty years ago, thanks to Cesar Chavez. He was the founder of the United Farm Workers union. When Chavez said “Si, se puede,” he meant something very different: “Yes, we can… seal the borders.”Cesar Chavez hated illegal immigration.

He was Hispanic, obviously, and definitely on the left, but he fought to keep illegal Mexican immigrants out of this country. He understood that peasants from Latin America will always work for less than Americans will. That’s why employers prefer them. Chavez knew that. “As long as we have a poor country bordering California,” he once explained, “it’s going to be very difficult to win strikes.”

In 1969, Chavez led a march down the center of California to protest the hiring of illegal immigrant produce pickers. Marching alongside him was Democratic Senator Walter Mondale, and the Rev. Ralph Abernathy, the longtime aide to Martin Luther King.

Ten years later, Chavez dispatched armed union members into the desert to assault Mexican nationals who were trying to sneak across the border. Chavez’s men beat immigrants with chains and whips made of barbed wire. Illegal aliens who dared to work as scabs had their houses fire-bombed and their cars burned.

Chavez wasn’t embarrassed about any of this. He bragged about it.

No matter. Chavez remains a progressive hero. President Obama declared his birthday a commemorative federal holiday.  It’s an official day off in half a dozen states.  There’s a college named after him, and dozens of public schools.

Cesar Chavez’s life is a reminder of how much the left has changed—and how quickly.

Until recently, most Democrats agreed with Chavez. They opposed unchecked immigration because they knew it hurt American workers. And they were right.

One study by a Harvard economist examined the effects of the mass migration of Cuban refugees to this country in 1980—the so-called Mariel boatlift. He found that American workers in Miami with a high school education saw their wages fall by more than thirty percent after the refugees arrived. If you believe in supply and demand, this is not surprising.

After the fall of Saigon in 1975, Democratic Governor Jerry Brown opposed letting Vietnamese refugees into California on the grounds that the state already had enough poor people. As he put it at the time, “There is something a little strange about saying, ‘Let’s bring in 500,000 more people’ when we can’t take care of the one million Californians out of work.”

First term Senator Joe Biden of Delaware agreed; he introduced federal legislation to curb the arrival of the Vietnamese.

Two decades later, leading Democrats were still wary of mass immigration, especially illegal immigration. As Bill Clinton put it in the 1995 State of the Union address, “…Americans… are rightly disturbed by the large numbers of illegal aliens entering our country. The jobs they hold might otherwise be held by citizens or legal immigrants. The public services they use impose burdens on our taxpayers.”

No prominent Democrat would say anything like that today without being denounced as a racist. Clinton got a standing ovation.

As late as 2006, there were still liberals who cared about the economic effects of immigration, legal or illegal. “Immigration reduces the wages of domestic workers who compete with immigrants,” explained economist Paul Krugman in the New York Times. “…We’ll need to reduce the inflow of low-skilled immigrants. Mainly, that means better controls on illegal immigration.”

That same year, Senator Hillary Clinton voted for a fence on the Mexican border. So did Barack Obama and Chuck Schumer and 23 other Senate Democrats.Not anymore.

Twenty years after Bill Clinton told Americans they had the right to be upset about illegal immigration, his wife scolded the country for enforcing border controls.

Not the economics of it. The law of supply and demand remained in effect. It’s not a coincidence that as illegal immigration surged, wages for American workers stagnated. What changed is that Democrats stopped caring about those workers. About the middle class, really.

One: According to a recent study from Yale, there are at least 22 million illegal immigrants living in the United States.

Two: Democrats plan to give all of them citizenship. Read the Democrats’ 2016 party platform.

Four: The biggest landslide in American presidential history was only 17 million votes.

The payoff for Democrats: permanent electoral majority for the foreseeable future. In a word: power.

That’s the point, no matter what they tell you; American workers be damned.