In a recent celebration of diversity, the San Jose Mercury-News praised the family values of Mexicans who watch television together, not like tiresome Americans who are too disconnected to view with others.

Below, the Pacheco family of Fremont gathers en masse to watch a telenovela soap opera on the Spanish-language network Univision. 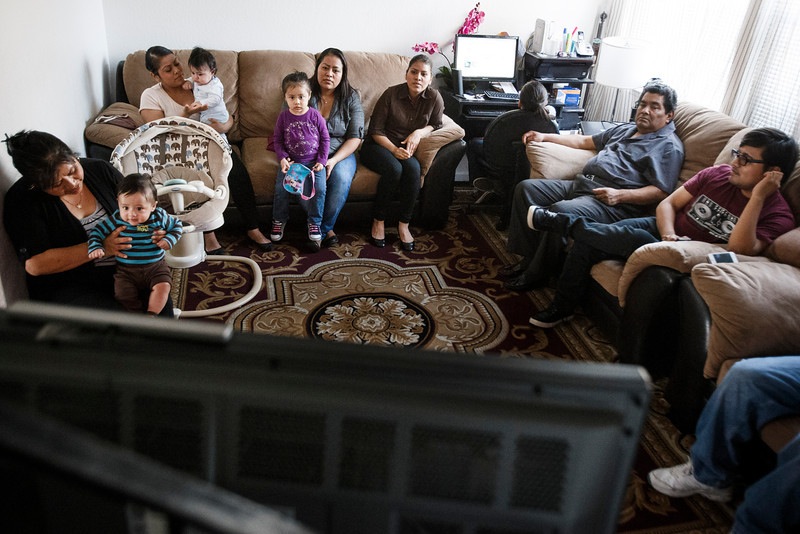 Plus the newspaper seems curiously cheerful that Hispanics will outnumber whites in California by 2014. You would think an English-language publication would understand that a growing population who prefer their news and entertainment in Spanish is not a plus for its business model.

But the Mercury-News thinks that increasing numbers of Spanish speakers are a fine addition to California’s diversity. The paper even positively observes that the Pacheco family spends hours daily glued to Spanish-language television because they want to follow the news of Mexico and apparently have much less interest in the affairs of the nation they chose to inhabit.

It is curious that the Mercury-News would celebrate this particular aspect of diversity.

The Spanish-language network hums for hours through the Pachecos’ apartment, bridging three generations who watch and comment on its steady stream of news, soap operas and daily soccer highlights from Barcelona to Guadalajara.

“Hispanics watch television together,” said Raul Rodriguez, general manager of KDTV-14, the Bay Area affiliate of the national Univision network. “You haven’t been able to see that since the ’50s or ’60s on English-language television.”

The station’s cross-generational appeal — to say nothing of the fact that Latinos soon will surpass whites as California’s largest population group — helped make KDTV’s 6 p.m. broadcast to the Bay Area’s highest-rated early-evening news show last year for adults between 25 and 54, beating English-language competitors such as KTVU, KGO, KNTV and KPIX.

Even as the national audience for local television news declined 6.5 percent last year, Spanish-language TV news has been holding its own and drawing younger, bilingual viewers in big metropolitan regions around the country, said Mark Jurkowitz, associate director of the Pew Research Center’s Project for Excellence in Journalism.

“Univision is like a family,” said Edgar Pacheco, 24, who lives with his parents, two sisters, a brother-in-law and baby nephew — and just two apartments down from another sister’s family that often joins the crew at dinner time. “It has information about what’s happening here but also the countries we’re from. We keep up with all the news in Mexico.”

Broadcasting from the 41st floor of a San Francisco high-rise, KDTV executives say they keep families like the Pachecos in mind as they gather and report the day’s news.

“We are the community we cover,” said KDTV’s news director, Carolina Nuñez, speaking between gulps of green tea just minutes before a recent 6 p.m. news broadcast. “We live it.”

KDTV evening co-anchors Maria Leticia Gomez, originally from Argentina, and Leon Felipe Gonzalez, scooped up last year from a Univision bureau in Mexico City, are celebrities to many of the Bay Area’s 1.2 million Spanish-speakers.

But 13 years after she took a seat in the anchor chair, Gomez still walks unnoticed through many Bay Area neighborhoods. And many of her colleagues in the television news business don’t pay much attention to the station either.

Founded in 1975 and added to the Univision fold in 1992, KDTV for more than a decade has been in tight competition with its English-language counterparts.

Still, “we don’t exist to them, in some sense,” Gomez said.

According to Nielsen ratings, the English-language stations in 2012 also trailed a Cantonese-language broadcast in attracting the crucial under-55 demographic to the early evening news.
Nationwide, Univision was the only major TV network to grow prime-time audience among adults under 50, a 2011 Pew report said. Much of the network’s recent focus has been to appeal to U.S.-born Latinos, not just their immigrant parents.

That means staying relevant to the more than half of Bay Area Latinos who speak Spanish at home but also speak English fluently. “They have choices to watch different stations,” Gomez said.

The Bay Area’s Latino community is among the most highly educated in the country and more likely to dine together at home than other families, according to census surveys — making Univision’s local and global news, futbol matches and dramatic telenovelas a living room backdrop that transcends generations and class.

KDTV was recently on what one of the station’s journalists called “24/7 pope watch” in anticipation of the white smoke that emerged from a Vatican chimney announcing the new pontiff.

Before and after the announcement, reporters trolled San Francisco’s Mission District and the South Bay for reaction from ordinary Spanish-speaking residents who are often invisible on English-language TV.

Gomez is herself a reflection of the pan-American interests of the Bay Area’s diverse Latino population. Though born in Argentina, her on-air speaking carries little hint of her native country’s telltale accent.

“The only time the viewers can tell I’m from Argentina is during the World Cup,” when her fandom is impossible to mask, she said.

Gomez speaks the Spanish of her second home, Mexico City, where her family settled after fleeing Argentina’s military dictatorship.

She learned English the same hard way many of her viewers did — by being plopped into an American middle school in her early teens. She remembers her embarrassment of not knowing that “hi” in English means hello.

That experience guides her, she said, as she tells the stories of Bay Area residents in tough circumstances — the migrant vineyard workers she visited in Napa County last fall, or the college students she profiled earlier this year who were brought to the country illegally as children.

The station puts an emphasis on explaining complicated issues such as U.S. immigration policy — a story that the news station covers almost daily.

“We have a commitment and different relationship with the viewer,” said Nuñez, the news director. “They’re relying on us for the information they need to stay in the country. It’s a responsibility we’ve taken really seriously.”