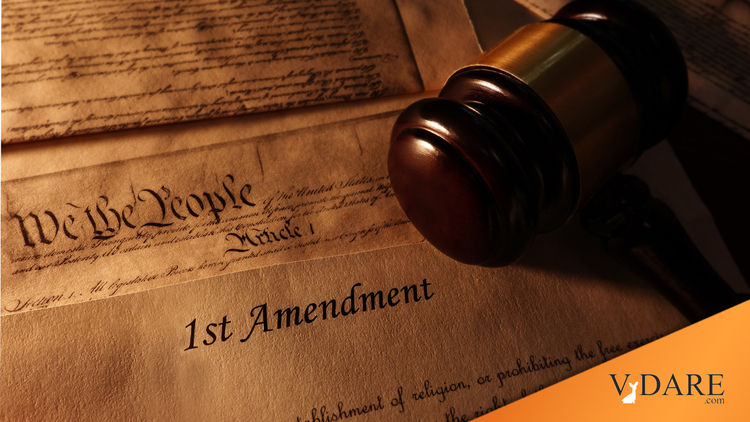 Immigration or free speech. You can't have both. And who says so? The Treason Bar. Freedom of speech is incompatible with immigration and those who advocate immigration. Just as immigrants oppose the Second Amendment, they, and their representatives, oppose the First Amendment. And the Treason Bar is on a jihad against those who dare speak out against the ongoing Obama Regime Administrative Amnesty.

The general counsel of a wealthy industry group is angrily calling on President Barack Obama to fire an union activist who is urging Congress to incorporate union members’ views in a pending bill that is now being written in secret...

David Leopold, the general counsel of the America Immigration Lawyers Association, aimed his March 26 invective at Christopher Crane, the serving president of the National Immigration and Customs Enforcement Council. The council is an AFL-CIO affiliate that represents 7,000 federal immigration officers and employees...

“How do you spell #insubordination? … Time for ICE to demand union boss Chris Crane’s badge & show him the door,” Leopold tweeted Tuesday...

Crane “is a bureaucrat, and bureaucrats don’t make policy,” Leopold claimed. “He’s out there and he’s criticizing the president. … He’s commenting on policy, not on union business or work conditions.”

“How is immigration policy part of union’s business? It is not,” said Leopold, whose clients include major health-care institutions and teaching hospitals who wish to import foreign medical professionals, such as nurses and doctors.

Leopold's war on the First Amendment is symptomatic of the radical left and their contempt for America and its freedoms. All that matters to them is electing a new people and the suppression of dissenting opinions. That an attorney would call for something so blatantly unlawful is astounding. Government employees hold First Amendment rights; the right of free speech and the right to peaceably petition the government. As do union officials. And you never heard a lawyer saying that a company has the right to fire union officers when the officers or union criticizes an employer. The radical left and the Treason Bar would rise up in indignation. But freedom of speech does not apply to those who oppose Barack Hussein Obama or oppose amnesty for illegal aliens.

Also note that the ICE union is not being supported by the AFL-CIO. The AFL-CIO is so compromised by cultural Marxism it will not even support its constituent unions .

Crane, of course, has been a long time thorn in the side of the Regime, and a target of the Treason Bar. He has well earned the evil gaze of the Great Eye.

What is Leopold's other concern is the interference that Crane is in the amnesty scheme and future income Leopold will earn from amnesty for illegals and more alien workers displacing Americans. And Leopold will destroy the country and the principles of freedom of speech in his greed and ideology.

It also tells us that immigration is incompatible with basic American freedoms. We cannot have immigration and their advocates and still hold our freedoms. In the end, immigrants and their partisans will destroy freedom in their evil.