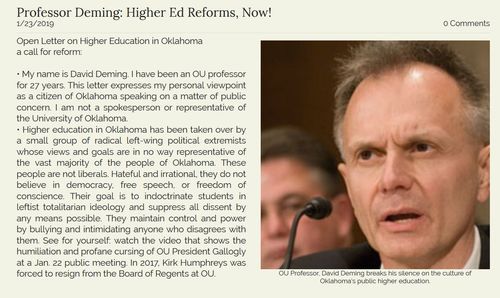 Many (most?) of our nation's universities are firmly in the grip of Cultural Marxism and Political Correctness, and that includes universities in red states.

Dr. David Deming, a geologist/geophysicist and Associate Professor of Arts and Sciences at the University of Oklahoma, has written and published an "Open Letter on Higher Education in Oklahoma" which sums up the state of academia, not just at OU, but in today's America.

My name is David Deming. I have been an OU professor for 27 years. This letter expresses my personal viewpoint as a citizen of Oklahoma speaking on a matter of public concern. I am not a spokesperson or representative of the University of Oklahoma.

Higher education in Oklahoma has been taken over by a small group of radical left-wing political extremists whose views and goals are in no way representative of the vast majority of the people of Oklahoma. These people are not liberals. Hateful and irrational, they do not believe in democracy, free speech, or freedom of conscience. Their goal is to indoctrinate students in leftist totalitarian ideology and suppress all dissent by any means possible. They maintain control and power by bullying and intimidating anyone who disagrees with them.
Professor Deming: Higher Ed Reforms, Now!, SoonerPolitics.org, January 23, 2019

Dr. Deming provides a number of examples of what he's talking about, including the bad treatment of conservatives. And check this out:

....in 2015, OU created an "Office of University Community" whose mission is to enforce political correctness on campus and indoctrinate students in left-wing political doctrines such as white privilege, cultural appropriation, and social justice. In October of 2018, the Office of Community sent out a memorandum warning students to not engage in "cultural appropriation" when choosing Halloween costumes. Think about that in terms of budget discipline: OU maintains a staff of ten people to regulate Halloween costumes.

OU has a "Gender + Equality Center" staffed by five people that put on an annual "Crimson and Queens Drag Show." Other wasteful boondoggles at OU include a Gay Lounge, Islamic Prayer Room, and a Center for Social Justice that publicly boasts of training students in political activism (of the type that was on display when President Gallogly was attacked).

President Gallogly is currently under attack for a recently-revealed off-campus video of two female OU students, both "laughing as one wore black paint on her face and used a racial slur about herself." And in what may or may not be related, someone "in an OU hat has been seen around campus in blackface".[Individual seen wearing blackface around OU campus, OU Daily, January 23, 2019]

Dr. Deming even has the temerity to bring up faculty salaries:

The loss of academic freedom at OU is so bad that one State Regent has warned that "higher education is rushing headlong toward an anti-intellectual abyss."

OU prides itself on professed values of "diversity" and "inclusion." These supposed policies are a fraud. For anyone who is a conservative (or even a politial moderate), the OU campus is the most intolerant and hateful place in the entire state. On Feb. 2, 2017, a student simply holding an American Flag had "racial slurs and threats" directed against him. Another student had "his Trump flag stolen and his white hat knocked off his head."

...in November of 2016, the OU Faculty Senate passed a resolution encouraging "everyone" to report cases of "hate speech" (anything that is politically correct) to the police, emulating totalitarian governments such as North Korea, Cuba or Venezuela.

There's more, you can read the whole thing here.

On January 14th, Kevin Stitt, a Republican political outsider who won the governorship by 12 points, was inaugurated as Governor of Oklahoma. Stitt should use the governor's bully pulpit to promote reform at OU and all public universities of Oklahoma. The state should be a leader in academic freedom, not just another nest of political correctness.

But first, OU has to deal with these blackface incidents. The two female students in the video have already withdrawn from OU, but still, President Gallogly has been called on to resign.