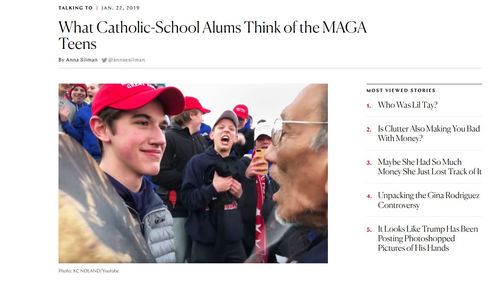 The Sixties vs. the Current Year: The Revolt Of The Unattractive And Uncool

… there’s one particularly bizarre (in my dumb opinion, anyway) aspect of this smirk insanity that goes unmentioned in your article: borderline-hysterical journal obsessions with being bullied in HS (and to a lesser extent, college).

I first noticed this during the Kavanaugh imbroglio: a whole subset of people oftentimes well into middle-age who I would imagine enjoy six-figure salaries and a decent amount of social standing (at least in their blue-check, NPR tote-carrying circles) falling to pieces reminiscing about being abused, to varying degrees real or imagined, by the kids who were richer/whiter/more popular/stronger/thinner/more heterosexual etc. than they. It struck me as, if genuine, a sign of some woefully maladjusted people.

I mean shit, New York Magazine ran a piece solely comprised of interviews with five people (including an overweight gay Latino, of course) who went to Catholic high schools/colleges for varying degrees of time and had various unpleasant interactions with affluent-ish white teens who could probably be best described as being properly socialized. No, really:

What Catholic-School Alums Think of the MAGA Teens, by Anna Silman, January 24, 2019

Unsurprisingly, most of the journos and other commentariats writing these lame pieces or melting down on Twitter aren’t the most visually arresting people, to say the least. I doubt many of them were getting laid on prom night. I guess what I’m wondering is how much of this is just virtue-signalling schtick/grievance kabuki theater performance art vs. actual emotional trauma/damage from largely benign and typical experiences in their formative/teen years? Like, how genuinely defective and broken are these people?

Long, meandering blurb, I know. I’m goofing off at work while writing this. Been reading your stuff for close to ten years, though.