Once upon a time, unions stood for improving the lives of American citizens. The historic union leader Samuel Gompers said, America must not be overwhelmed.

Now unions have turned to the dark side of open borders, along with universities, the entire Democrat party and the Catholic church.

Below, an SEIU member in Chicago spoke earlier this month in favor of Obamas amnesty. 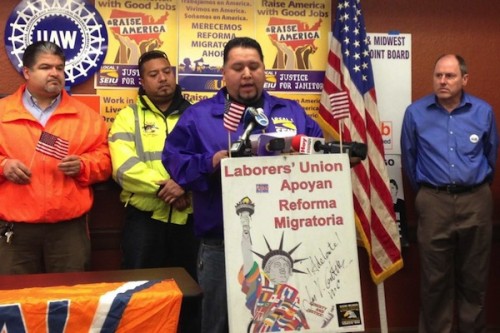 In the video following, Byron York noted that illegal aliens can provide dues and muscle for unions, even if they are not supposed to vote.

Remember that while liberal elites want future Democrat voters, the aliens themselves care only about the work permits so they can grab more American dollars. Proof: Only 40% of the 2.7 million aliens who were amnestied in 1986 had become naturalized citizens by 2009. Therefore:

Work permits ARE the amnesty.

Americas struggling labor unions got a gift this year when President Obama announced his expansive executive actions on immigration: potentially thousands, if not millions, of new members.

Labor leaders reportedly are launching a new recruiting push by reaching out to those immigrants affected by Obamas immigration announcement last month.

The actions are expected to offer work permits to some 4 million immigrants who entered the U.S. illegally and, until now, were reluctant to join unions for fear of retaliation. Union leaders now say the presidents actions give them new protections and are keen on signing them up.

I think well see very positive changes because of the action, Tom Balanoff, president of Service Employees International Union Local 1, told The Associated Press. One of them, I hope, is that more workers will come forward and want to organize.

Even before the presidents announcement which infuriated congressional Republicans labor unions were pushing the president to use executive powers to ease immigration policy.

On the day of Obamas decision, the AFL-CIOs Richard Trumka said the move would allow millions of people to live and work without fear, and afford them the status to assert their rights on the job.

The SEIU, whose more than 2 million members include janitors and maintenance workers, recently announced a website where immigrants can learn about the action. And the United Food and Commercial Workers and other unions are planning workshops and partnering with community groups and churches to reach out to immigrants.

The efforts come even as Republicans and other opponents of Obamas action work to undo it, saying it will hurt American workers, and as some labor experts say theyre skeptical immigrants will feel safe enough to unionize in large numbers.

Labor unions have struggled over the past decade to maintain their membership and political muscle. The ranks fell by more than 1.2 million between 2003 and 2013, when there were about 14.5 million members nationwide, according to the Bureau of Labor Statistics. The percentage of workers that were union members fell from 12.9 percent to 11.3 percent during that same period.

Business-friendly Republican governors have approved measures in recent years aimed at weakening labor, even in places such as Michigan that were once considered union strongholds. And in some states where Republicans boosted their numbers in the November midterms, lawmakers are planning another wave of so-called right-to-work bills next year.

In Obamas home state of Illinois, a GOP businessman unseated the Democratic governor last month in part by promising to constrain labors influence in government.

Unions say they can help protect immigrants against abuses such as wage theft and discrimination. And even if the immigrants arent citizens and cannot vote, they can help unions by paying dues and doing the heavy lifting needed around election time knocking on doors, driving voters to the polls and making phone calls for pro-labor candidates.

Republicans say the executive actions which would affect people who have children and have been in the U.S. more than five years will make it tougher for Americans already struggling to find good-paying jobs. Theyve pushed legislation to void the new protections.

The presidents action is a threat to every working person in this country their jobs, wages, dreams, hopes and futures, said GOP U.S. Sen. Jeff Sessions of Alabama.

Felipe Diosdado, who came to the U.S. illegally in 1997, says undocumented people he knows are working for cash at small businesses that arent unionized because theyre afraid to apply at larger job sites that are more likely to verify a workers immigration status.

And while he acknowledged many immigrants are fearful because the protection is temporary and could be undone by a future president, he expects some will sign up.

Its a risk, but you always have a risk, said the 36-year-old father of two, who joined a union while working at a construction site 14 years ago. Being undocumented, you live with risk every day.

Shannon Gleeson, an associate professor at Cornell Universitys School of Industrial and Labor Relations, said she expects the response to be very place-specific, with people coming forward in places that have traditionally been considered immigrant-friendly, like Los Angeles, while being reluctant in places like Houston, where its a struggle to find a unionized hotel.