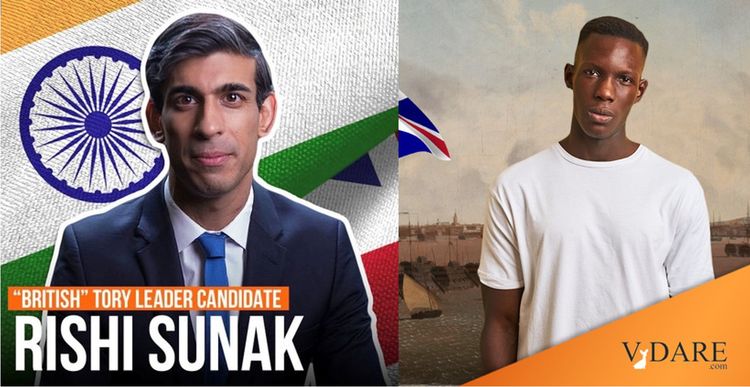 UK's Rishi Sunak And John Derbyshire On Keeping Illegals Aliens On Cruise Ships Or "Hulks"—Sunak Actually Got There First!

I‘m flattered to know that Rishi Sunak, one of the two contenders for leadership of Britain‘s Tory Party, and thence Prime Minister, is a Derb fan.

Britain has, as I have often reported, been plagued by Third World opportunists entering the country illegally after crossing the English Channel from France in boats supplied by people smugglers. Short of declaring war on France, whose government is of course complicit in the matter, there isn‘t much the Brits can do to stop the boats, so they have to take care of the illegals somehow. They‘ve been putting them up in hotels and old military facilities, but options are running out.

Here and on Radio Derb I‘ve suggested hulks—unwanted old ships that could be fitted up as floating detention facilities, as used to be done back in the day with surplus criminals.

"House infiltrators in "hulks"--prison ships, used in place of jails 1770s--1850s. My great-great-grandfather served 7 years on one in the 1840s 'for stealing 3 hen fowls & 20 chickens.' At least it would stop them harassing local women"-@DissidentRight https://t.co/KoW7jdmHnZ

Well, Rishi Sunak has, so to speak, come on board with my idea. He has…

Ah, wait a minute. Reading down the Daily Mail story a bit further, I see that Mr Sunak got there first.

OK, the Daily Mail is against Rishi Sunak, but the point stands about accommodating asylum seekers on cruise ships.https://t.co/6uLIG5VJ0o

Back in 2020 he proposed housing the illegals in cruise ships.

So this is a case of great minds thinking alike, not appropriation of my own powerful thoughts.

Whatever. I wish Mr Sunak well with his proposal, and in his campaign for the Tory leadership.