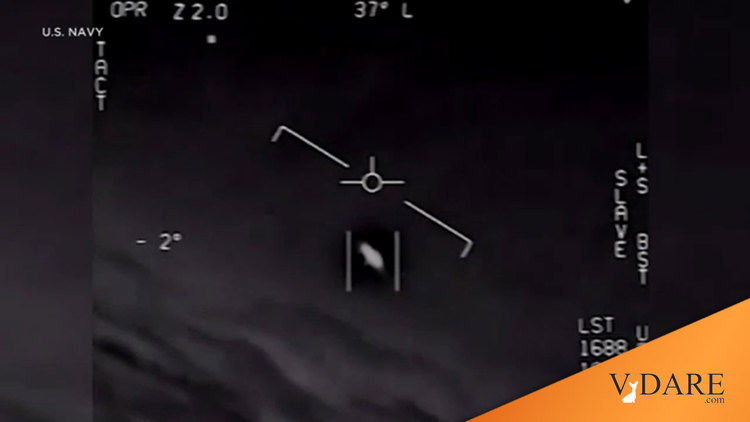 UFO Report: Mr. President, We Must Not Allow A Hypersonic Gap!

U.S. Finds No Evidence of Alien Technology in Flying Objects, but Can’t Rule It Out, Either

A new report concedes that much about the observed phenomena remains difficult to explain, including their acceleration, as well as ability to change direction and submerge.

WASHINGTON — American intelligence officials have found no evidence that aerial phenomena witnessed by Navy pilots in recent years are alien spacecraft, but they still cannot explain the unusual movements that have mystified scientists and the military, according to senior administration officials briefed on the findings of a highly anticipated government report.

The report determines that a vast majority of more than 120 incidents over the past two decades did not originate from any American military or other advanced U.S. government technology, the officials said. That determination would appear to eliminate the possibility that Navy pilots who reported seeing unexplained aircraft might have encountered programs the government meant to keep secret.

In other words, your tax dollars aren’t going toward cool futuristic stuff.

But that is about the only conclusive finding in the classified intelligence report, the officials said. And while a forthcoming unclassified version, expected to be released to Congress by June 25, will present few other firm conclusions, senior officials briefed on the intelligence conceded that the very ambiguity of the findings meant the government could not definitively rule out theories that the phenomena observed by military pilots might be alien spacecraft.

Americans’ long-running fascination with U.F.O.s has intensified in recent weeks in anticipation of the release of the government report. Former President Barack Obama further stoked the interest when he was asked last month about the incidents on “The Late Late Show with James Corden” on CBS.

“What is true, and I’m actually being serious here,” Mr. Obama said, “is that there is footage and records of objects in the skies that we don’t know exactly what they are.’’

The report concedes that much about the observed phenomena remains difficult to explain, including their acceleration, as well as ability to change direction and submerge. One possible explanation — that the phenomena could be weather balloons or other research balloons — does not hold up in all cases, the officials said, because of changes in wind speed at the times of some of the interactions.

The final report will also include a classified annex, the officials said. While the annex will not contain any evidence concluding that the phenomena are alien spacecraft, the officials acknowledged that the fact that it would remain off limits to the public was likely to continue to fuel speculation that the government had secret data about alien visitations to Earth.

Many of the more than 120 incidents examined in the report are from Navy personnel, officials said.

Are airline pilots reporting the same phenomenon? If not, why not?

The report also examined incidents involving foreign militaries over the last two decades. Intelligence officials believe at least some of the aerial phenomena could have been experimental technology from a rival power, most likely Russia or China.

One senior official briefed on the intelligence said without hesitation that U.S. officials knew it was not American technology. He said there was worry among intelligence and military officials that China or Russia could be experimenting with hypersonic technology.

But, surely, Russian or Chinese technology, while it might go really fast in a straight line, would be limited to the known laws of physics, such as aircraft not making 90 degree turns? So, are we supposed to believe the evidence for the UFOs going really fast, but not believe the part about them making right turns? But if they aren’t making right turns, maybe the video in general is not trustworthy?

… Russia has been investing heavily in hypersonics, believing the technology offers it the ability to evade American missile-defense technology. China has also developed hypersonic weaponry, and included it in military parades. If the phenomena were Chinese or Russian aircraft, officials said, that would suggest the two powers’ hypersonic research had far outpaced American military development.

Mr. President, we must not allow… a hypersonic gap!”