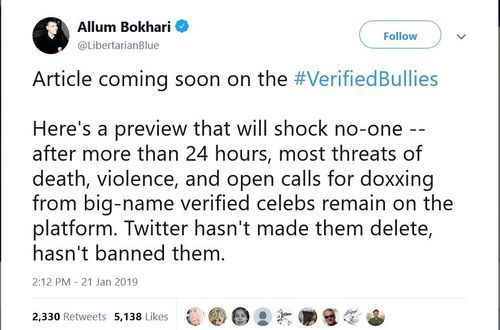 Breitbart's Allum Bokhari notes that Twitter is not cracking down on this hate—the extreme hate against Covington Catholic school kids, specifically because they are white:

Article coming soon on the #VerifiedBullies

Here's a preview that will shock no-one -- after more than 24 hours, most threats of death, violence, and open calls for doxxing from big-name verified celebs remain on the platform. Twitter hasn't made them delete, hasn't banned them.

One of his replies includes this: 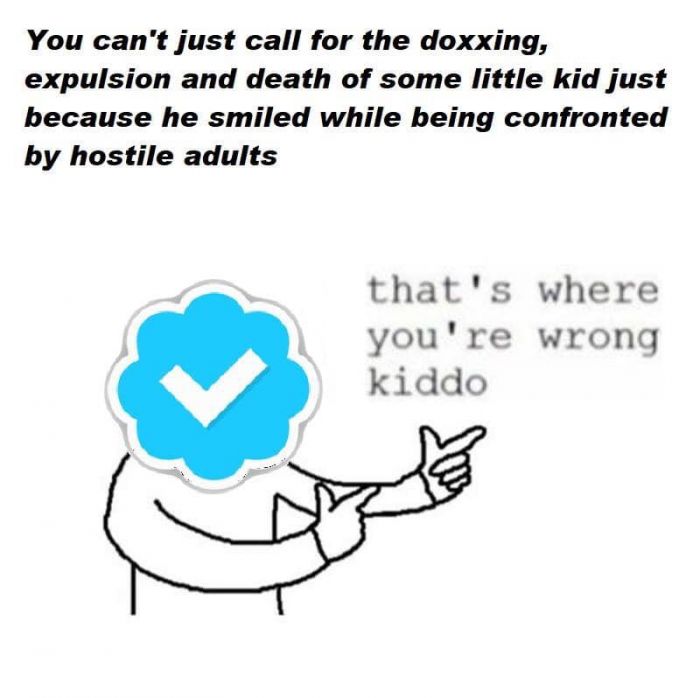 The "blue check" assures you that celebrities are who they say they are, for example actresses and models suffering from Trump Derangement Syndrome, rather than parody accounts.

In  The Hate That Dare Not Speak Its Name, VDARE.com podcaster Virginia Dare noted this hateful tweet.

This is interesting because the commentator in question has a “verified” account, the ones with the blue checkmark. And verified accounts are partly dependent on ideology. When Twitter introduced new standards regarding verified accounts back in December, the company suggested ideology would be a factor in determining who gets the coveted checkmark.

Indeed, the whole reason Twitter changed the standards was because journalists were mad so-called “white nationalists” had verified accounts, which Twitter regarded as a boost of credibility. [Twitter rolls out new “hate-speech” guidelines, WND, December 18, 2017]

Before, the checkmark was simply to indicate whether an account was the actual person or not, or just a parody. Now, Twitter is in the position, at least somewhat, of giving a stamp of ideological approval to verified accounts.

It’s very difficult to imagine a Trump supporter or Second Amendment supporter saying anything as vile as the above and still having a verified account, or even an account at all.

Twitter , which deverifies and bans right-wing figures for nothing but ideology, won't ban celebrities for literal death threats.