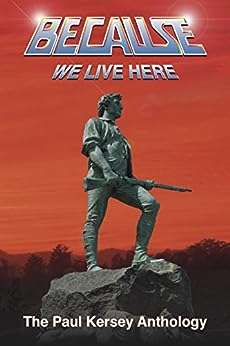 SBPDL NOTE: It's out for Kindle! Because We Live Here: The Paul Kersey Anthology! Secure your signed copy - publishing December 7th - by contacting us at SBPDL1@gmail.com. A $25 donation gets you a signed copy! For a donation of $300, you get signed copies of ALL books published by Paul Kersey.

The NFL and a group of players reached an agreement in principle late Wednesday night to partner on a plan to address social justice issues considered important to African-American communities, sources told ESPN.

The unprecedented agreement calls for the league to contribute $89 million over seven years to projects dealing with criminal justice reform, law enforcement/community relations and education. 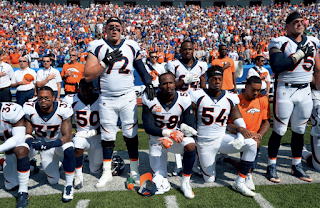 The black players of the NFL are uniting in racial solidarity... the overwhelming white fanbase must turn off the game for good

During a conference call Wednesday night, Malcolm Jenkins and Anquan Boldin, who lead roughly 40 players who have negotiated with the league office about demonstrations during the national anthem, guided the group through the highlights of the package, which represents the NFL's largest contribution to a social issue, surpassing that of Salute to Service or Breast Cancer Awareness/Crucial Catch.

The partnership came a day after some players broke away from the Players Coalition because of their dissatisfaction with how Jenkins and Boldin have handled negotiations. Commissioner Roger Goodell, believing that an agreement was at hand, was furious when ESPN reported that players were breaking off, according to one source. But during an afternoon call, Jenkins asked that the commissioner and the owners continue to stand with the players and allow them to do important work in the community.

The agreement does not include language calling for players to end protests during the national anthem in exchange for funds; there's no implicit quid pro quo. But the NFL hopes this effort will effectively end the peaceful yet controversial movement that former San Francisco 49ers quarterback Colin Kaepernick started in 2016, when he refused to stand for the anthem.

Under the league's proposal, the $89 million has been earmarked over a seven-year period for both national and local projects. On the national level, owners this year will allocate $5 million, with their commitment growing annually and maxing out at $12 million per year from 2021 through 2023.

At the local level, owners would put up $250,000 annually and expect players to match that amount, totaling $500,000 for each team. Players and owners can exceed that amount if they choose, with no matching requirement. In addition, there would be other fundraising opportunities, including telethons and auctions of jerseys worn in games.

The $73 million in national funding has been vetted and approved, a league source said. However, the owners must vote on the matching-funds component on the local level and will do so at their March meetings.

For months, Goodell and Troy Vincent, the league's executive vice president of football operations, strived to find common ground with players who took a knee and raised fists in an effort to shine a light on racial injustice.

The owners whom Goodell and Vincent serve could have attempted to push through new rules regarding the anthem in the NFL game-operations manual during offseason committee meetings. However, for Goodell and Vincent, trying to force players to stand for the anthem — which would have undoubtedly triggered a fierce battle with the NFL Players Association — wasn't a fight worth having. League sources also said Goodell, in particular, believes that fighting for social justice is the right thing to do, which factored into the decision to place no anthem attachments on the partnership.

Players came to the table in a rare position of power for them, because many fans have cited protests as the main reason they've tuned out the NFL over the past two seasons. Concerned about ongoing fan backlash and the angst of the league's corporate partners, Goodell pushed hard to establish the framework of a deal before next week's league meeting in Dallas.

The agreement calls for national funds to be allocated accordingly: 25 percent to the United Negro College Fund; 25 percent to Dream Corps; and 50 percent to the Players Coalition, which has filed 501(c)(3) and 501(c)(4) paperwork for nonprofit status as a fiscally sponsored project. This week, the coalition hired The Hopewell Fund to oversee and advise the group, which hopes to work with grass-roots and nonprofit organizations.

Money at both the national and local level would provide grants for nonprofit organizations focused on law enforcement and community relations, criminal justice reform and education reform. A working group of five players, five owners (or owners' representatives) and two NFL staff members would help identify future initiatives to pursue.

It's time to completely abandon watching a more than 70 percent black league, where black players take a knee during our national anthem out of racial solidarity with Colin Kaepernick (who started his tantrum out of racial hate towards white people and white cops).

This $89 million payout to black causes, to placate kneeling black players is nothing more than a transfer of wealth from white fans (the predominate racial fanbase of the league) to support causes 100 percent against white Americans.

Turn it off for good.