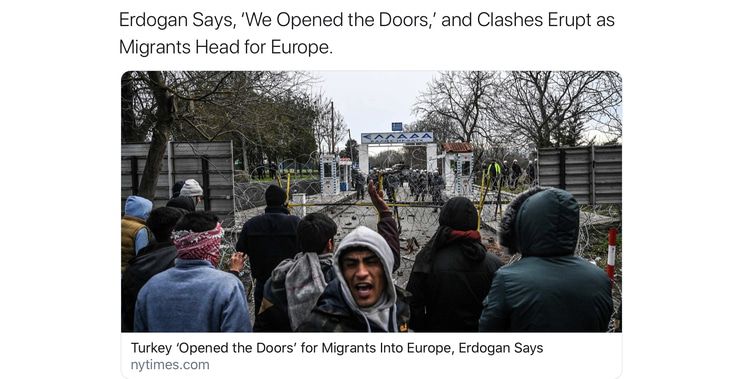 Erdogan Says, ‘We Opened the Doors,’ and Clashes Erupt as Migrants Head for Europe

Thousands of migrants in Turkey faced off with riot police at the Greek border, and the Turkish leader lashed out at the E.U., saying it had not helped him manage a growing crisis in northern Syria.

KASTANIES, Greece — With tear gas clouding the air, thousands of migrants trying to reach Europe clashed with riot police on the Greek border with Turkey on Saturday morning, signaling a new and potentially volatile phase in the migration crisis. …

President Recep Tayyip Erdogan of Turkey declared on Saturday that he had opened his country’s borders for migrants to cross into Europe, saying that Turkey could no longer handle the numbers fleeing the war in Syria.

“What did we do yesterday?” he said in a televised speech in Istanbul. “We opened the doors.” His comments were his first to acknowledge what he had long threatened to do, push some of the millions of Syrian refugees and other migrants in Turkey toward Europe in order to cajole the European Union to heed Turkey’s demands.

He accused European leaders of not keeping their promises to help Turkey bear the load of millions of Syrian refugees.

Mr. Erdogan has also called for European support for his military operations against a Russian and Syrian offensive in northern Syria that has displaced at least a million more Syrians toward Turkey’s border. He has also sought more support for the displaced and the 3.6 million Syrian refugees already in Turkey.

The migrants at the border had heeded Mr. Erdogan’s call and rushed to Turkey’s borders with Europe, some on Friday taking free rides on buses organized by Turkish officials. But once at Europe’s doorstep, they were met with a violent crackdown.

Migrants were also heading by sea to the Turkish coast, from where they hope to reach Greek islands, facilitated by the Turkish authorities, but officials reported few arrivals Saturday, perhaps because of poor weather at sea.

The mini-exodus was live-streamed by Turkish state television in scenes reminiscent of the 2015 migrant crisis that Europe solved only with Turkey’s help. Syrians shared information, some joking about the Turkish facilitation, suggesting they should publish the telephone numbers of people smugglers, too....

Mr. Erdogan is struggling to handle the growing crisis in Idlib, the last Syrian province held by the rebel forces his government has supported. Turkey has lost more than 50 soldiers in the past two months in Syria, which has angered many Turks, while domestic resentment toward Syrian refugees has grown amid an economic downturn.