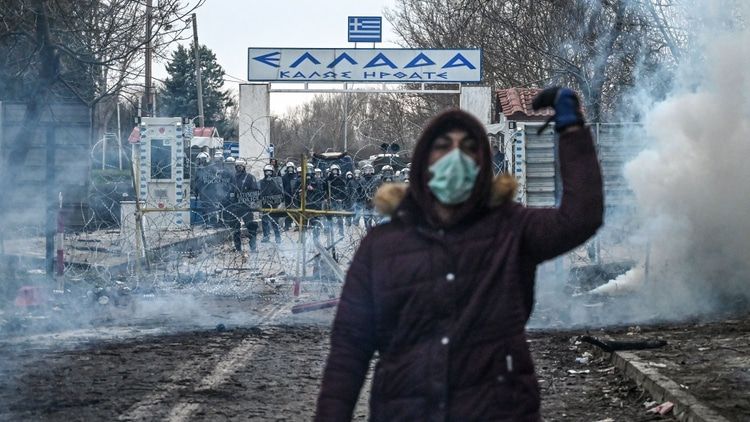 Greeks Resist Invasion from the East

Two and a half millennia ago, the Greeks defended Europe against invaders from the east. One example was the Battle of Thermopylae in which the famous 300 Spartans and other Greeks fought to the death against a much larger Persian force.

Now, in 2020, the Greeks are resisting invasion from the east again.

Greece blocked nearly 10,000 "illegal" entries into the European Union from Turkey on Saturday [February 29] and Sunday morning [March 1], a government official has said.

The statement on Sunday comes a day after 13,000 migrants gathered on the Turkish-Greek border, following Ankara's announcement that it will no longer stop refugees from crossing into Europe.

Maybe they're both right. But at least Greece was able to stop nearly 10,000 from crossing. And their efforts to block the border may dissuade others from trying.

...Greek Defense Minister Nikos Panagiotopoulos accused Turkey of intentionally organizing the migrants along the shared border after finding out where Greek troops are posted.

If that accusation is true, it could mean that the 76,000 got in where Greek troops are not posted. And, maybe the Turks are exaggerating.

Following the military escalation between the Russian-backed Syrian army and the Turkish regime, combined with announcements from Turkey that it would be making good on previous threats to flood Europe with migrants, Greece has completely sealed off its border with Turkey.

The Greek government has deployed fifty navy warships to protect the Greek islands and ten helicopters to guard land borders against foreign invaders sent by the Erdogan regime, German daily tabloid Bild reports. The army has been called.....

Another Deutsche Welle article reports that

Greek army and police patrols used tear gas and stun grenades to stop attempts by thousands of refugees to enter the country on Sunday [March 1].

While the situation appeared calm on Sunday morning, the afternoon saw more unrest when authorities used tear gas and water cannon to push back crowds. Migrants threw rocks and other objects at police officers, resulting in one injury.

The United Nation's migration organization reported that at least 13,000 people had gathered on Turkey's 212-kilometer (125-mile) border with Greece by Saturday night, the majority of whom appeared to be from Afghanistan.

Now that we have a treaty with the Taliban, we could fly soldiers directly out of Afghanistan to Greece to help the Greeks keep Afghans from invading Europe.

Greece said Sunday [March 1] it had blocked nearly 10,000 migrants from entering. Police and soldiers blocked 9,972 "illegal entrances" from reaching the northeastern Evros region over the past 24 hours, according to a Greek government source.

Should NATO be helping the Greeks? Oh wait, Turkey is also a NATO member!