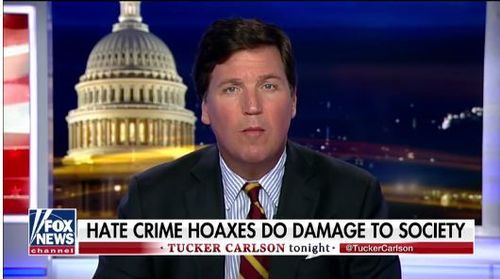 Hate crime hoaxes are interesting since they violate the basic human instinct to seek pleasure, but increasingly they have become a political tool to bash some group for evil racism. Tucker Carlson recently interviewed a professor with a new book that examines the subject, Hate Crime Hoax: How the Left is Selling a Fake Race War where author Wilfred Reilly remarked that “the demand for bigots in America greatly exceeds the supply as of right now.”

So the Southern Poverty Law Center, for example, is forced to rejigger various events into hate extravaganzas to keep the dollars flowing in to its coffers — based on the idea that America is a monstrous hate state even as millions struggle to immigrate here to share the hostility.

My 2017 Social Contract article Hate Crime Hoaxes and Tribal Threats Expand in the Digital Age included one of the hoaxers mentioned by Professor Reilly. Yasmin Seweid, 18, claimed she was attacked on a Manhattan subway by Trump supporters (!), but she later admitted that nothing happened. So her strict muslim father arranged for a severe haircut — isn’t diversity great!? 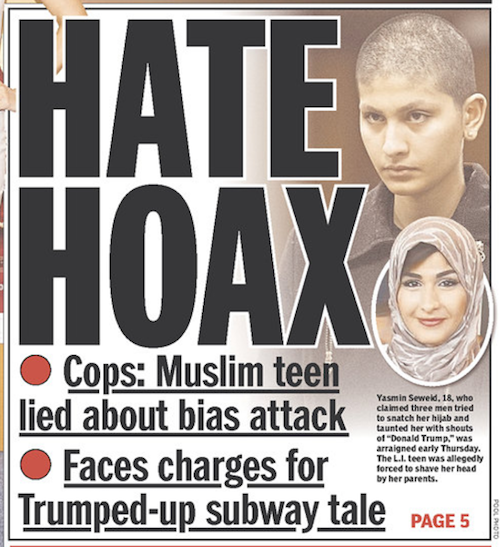 TUCKER CARLSON: Well, the Jussie Smollett story is amazing, but it is exceptional only to the extent it has received much more publicity than most hate hoaxes, and there were many of them. Bogus stories concocted by the left for political reasons and repeated without question by a compliant media.

Dr. Wilfred Reilly is an Associate Professor at Kentucky State University. He is the author of the book, “Hate Crime Hoax: How the left is selling a fake race war.” Professor, thanks very much for coming on tonight. So you have looked at a lot of these cases, what would you say generally speaking is the point of them?

PROFESSOR WILFRED REILLY: Well, thanks for having me, Tucker, and as you said, first of all, they are quite a few of these cases. What we find is that virtually all of the high-profile widely reported hate crimes over the past two to three years have been hoaxes. That extends To Jussie Smollett.

CARLSON: Wait, wait. I am sorry, I am going to interrupt you there. I just want to make sure I understand what you are saying. Virtually all of the well-publicized hate crimes in the last several years have been hoaxes?

REILLY: Very, very many of the best air publicized incidents — Eastern Michigan, Air Force Academy, Yasmin Seweid, the burnt black church, the young African-American woman that said that she was literally urinated on by white men, Kean College, Wisconsin Parkside — so on down the line. All of those incidents that I have mentioned, I think you could probably put Covington Catholic in that category.

CARLSON: Yes, we sure do.

REILLY: Those have been not actual incidents of interracial violence. They have been hate hoaxes. This is also by the way very often true of hate hoaxes reported by alt-right, but the phenomenon does seem concentrated on the left.

Very many high-profile hate hoax stories probably most simply turn out to be fakes. I’m not surprised that the Jussie Smollett story turned out to be a hoax, and I don’t think you are either and that very many other people are.

CARLSON: No, I’m not. Now, most hoaxes are designed to enrich the person who perpetrates them. I mean, they are scams, right? They are scams that bring the criminal money, but money doesn’t change hands in these cases, so what is the point of doing it?

REILLY: Well, that is a fascinating question, Tucker, first of all, I will say that in a fair number of cases, money does change hands if you are talking about insurance money. So in Chicago, for example, we saw the Velvet Ultra Lounge case where the owner of a popular gay and bisexual nightclub burnt his own business to the ground, collected, I believe a 20-plus thousand dollar check for that and attributed that originally to homophobes, so that is a partial motivation.

But I will say that I think a broader motivation for these hoaxes is that the demand for bigots in America greatly exceeds the supply as of right now.

So it is not much of a secret that in America, we have a very well funded grievance industry. The Southern Poverty Law Center, which 30, 40 years back did a great deal of good, but currently has an active and vested endowment of $432 million.

REILLY: They’ve taken $58 million to $96 million every year, at least in terms of the records that I have looked at back going some time. Black Lives Matter right now up to about 400,000 social media fans; 360,000 followers. You have organizations like CAIR — Council for American Islamic Relations.

CARLSON: Right. Someone has got to justify the existence of all this fund-raising machines. Professor, this is a fascinating conversation, and I appreciate you coming on tonight. Thank you.