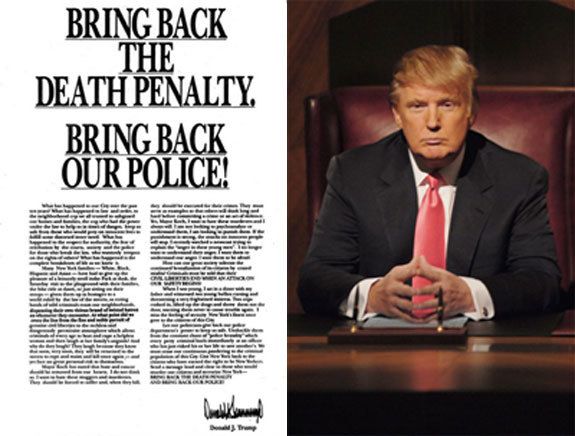 After the Central Park jogger rape and the arrests of some of the guilty parties, in a year (1989) when there would be a total of 1905 murders in New York, and the year before New York murderers set the still standing record of 2205 murders (9/11 is considered to be in different category) Donald Trump did this ad in favor of the death penalty.

He was right, of course.

An article from The Atlantic in 2015 attacked him for this, saying first that Trump hadn't actually referred to the Central Park Five  (still accused, not convicted yet) in the ad, but that "its timing made the connection inescapable".[Donald Trump's Racially Charged Advocacy of the Death Penalty, by Matt Ford, December 18, 2015]

Almost all of the Supreme Court's death penalty opposition is based on the fact that blacks commit death penalty crimes at wildly disproportionate rates. That's why the Atlantic's Matt Ford calls Trump's death penalty support "racially charged"—because the killers are black.

However, Trump was right: getting away with murder is not a civil right. Maybe a Trump-appointed Supreme Court can overturn some of this.

Here's the full text of the ad below:

BRING BACK THE DEATH PENALTY

BRING BACK OUR POLICE!

Many New York families—White. Black. Hispanic and Asian—have had to give up the pleasure of a leisurely stroll in the Park at dusk, the Saturday visit to the playground with their families, the bike ride at dawn, or just sitting on their stoops—given them up as hostages to a world ruled by the law of the streets, as roving bands of wild criminals roam our neighborhoods, dispensing their own vicious brand of twisted hatred on whomever they encounter. At what point did we cross the line from the line and noble pursuit of genuine civil liberties to the reckless and dangerously permissive atmosphere which allows criminals of every age to beat and rape a helpless woman and then laugh at her family's anguish? And why do they laugh? They laugh because they know that soon, very soon, they will be returned to the streets to rape and maim and kill once again—and yet face no great personal risk to themselves.

Mayor Koch has stated that hate and rancor should be removed from our hearts. I do not think so. I want to hate these muggers and murderers. They should be forced to suffer and, when they kill, they should be executed for their crimes. They must serve as examples so that others will think long and hard before committing a crime or an act of violence. Yes, Mayor Koch. I want to hate these murderers and I always will. I am not looking to psychoanalyze or understand them, I am looking to punish them. If the punishment is strong, the attacks on innocent people will stop. I recently watched a newscast trying to explain the “anger in these young men”. I no longer want to understand their anger. I want them to understand our anger. I want them to be afraid.

How can our great society tolerate the continued brutalization of its citizens by crazed misfits? Criminals must be told that their CIVIL LIBERTIES END WHEN AN ATTACK ON OUR SAFETY BEGINS!

When I was young, I sat in a diner with my father and witnessed two young bullies cursing and threatening a very frightened waitress. Two cops rushed in, lifted up the thugs and threw them out the door, warning them never to cause trouble again. I miss the feeling of security New York's finest once gave to the citizens of this City.

Let our politicians give back our police department's power to keep us safe. Unshackle them from the constant chant of "police brutality" which every petty criminal hurls Immediately at an officer who has just risked hit or her life to save another's. We must cease our continuous pandering to the criminal population of this City. Give New York back to the citizens who have earned the right to be New Yorkers. Send a message loud and clear to those who would murder our citizens and terrorize New York—

BRING BACK THE DEATH PENALTY AND BRING BACK OUR POLICEI