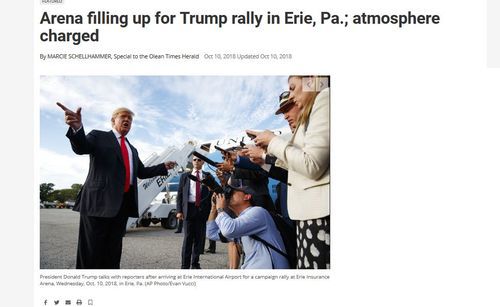 I just attended President Trump's rally in Erie, Pennsylvania and I have to report that things are going very well in Trump country. [Arena filling up for Trump rally in Erie, Pa.; atmosphere charged, By Marcie Schellhammer, Olean Times Herald, October 10, 2018]

The event felt more like a rock concert or major sporting event than a political rally. I witnessed thousands of people waiting in line as far as you could see before the doors even opened and there were vendors stationed outside the arena selling all types of Trump themed merchandise with much of it being comical in nature. The mood was very positive and upbeat and you could tell everyone was really enjoying themselves. The rally itself was part pep rally, part comedy routine as the president alternated between motivating attendees to help get out the vote and cracking them up with his hilarious story-telling. Trump's patented high energy even seemed to have rubbed off on the local Pennsylvania politicians who also got the crowd to both cheer and laugh. One of the biggest reactions of the night was when Senate candidate Lou Barletta said "I'll tell you how good the economy is—this economy is so good that even Colin Kaepernick has a job!"

After also attending the rally in 2016, I have to say that this one probably had twice the number of people attend. It looked like thousands were stuck outside and couldn't get in. I tried to find coverage of it in the media but they're too busy covering the dozen protesters instead of the thousands who showed up! I would have to agree with the president that he has indeed grown the Republican Party into a much bigger and more formidable force.

I think we have brought a lot of people in. You know. The party is a much bigger party now, and it’s like really a party for the working men and women in this country, in addition to plenty of others. I guess in the true sense, it has been changed, and I think that’s why I won an election nobody else would have won. If you look at the places I’ve won, nobody else would have won those places. And a lot of that is because of my views which are very strongly held.

'The Party Is Much Bigger Now.' Read Donald Trump's Interview With TIME on His Effect on the GOP, TIME Magazine, October 12, 2018

We all know President Trump's strongly held views include those on immigration and I did notice that inside the arena, workers were giving out different signs for people to wave and one of the signs read "FINISH THE WALL" which I interpret to mean they plan to start production of the wall between now and 2020. So, just like how Trump is replacing his 2016 campaign slogan of  "Make America Great Again" with "Keep America Great" for his reelection, he also seems to be replacing the famous chant of "Build the Wall" with a new chant  of "Finish the Wall!" for his 2020 reelection. President Trump is truly a marketing genius!