Trump Picks Pence For VP—It Could Be Have Been Worse

On the front page of the Drudge Report (as of 3 PM EST) is this somewhat alarming news. 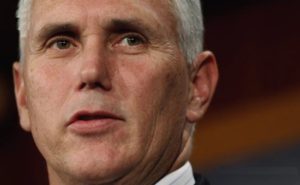 Washington Watcher covered  our objections to Pence in NO To “Hapless Jackal” Mike Pence Too! Trump Has Better VP Choices, and our even greater objections to New Gingrich in NO TO NEWT! A Gingrich VP Pick Will Only Weaken Trump.

Ann Coulter's instinct was sound when she wrote that the VP choice might be "Trump’s First Mistake".

Much as we don't like Pence, it could be worse. While Bush picked Cheney for VC because of competence, experience, and a perceived need for "gravitas", I'm sure he would have liked to pick a woman or a minority.

John McCain did pick a woman for VP, and went on to lose.

Trump could have picked Marco Rubio, one of the black Republicans like Herman Cain, or Joni Ernst. As Washington Watcher wrote in the "Hapless Jackal" piece quoted above

[A]s Trump’s campaign manager Paul Manafort correctly told the Huffington Post’s Howard Fineman some time ago, selecting a woman or minority “would be viewed as pandering.”  [Donald Trump’s Top Adviser: ‘This Is Not A Hard Race’, May 26, 2016]

Pence may be a "hapless jackal"—I really didn't like his immigration stance during the Bush Amnesty push—but he's a white male "hapless jackal". Expect to hear more about his whiteness and maleness from the Democrats and the media.