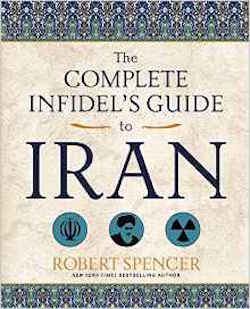 The prolific critic of Islam Robert Spencer, the webmaster of the excellent JihadWatch.org, has published a new book that warns the west about its most serious enemy: “The Complete Infidel’s Guide to Iran”.

As he remarks in the interview below, “Iran is what ISIS aspires to be” namely a jihadist state dedicated to killing infidels and conquering the world for Islam.

Spencer reminds readers that Shi’ite Iran awaits the 12th Imam, an apocalyptic figure signaling the end times, and the author believes Iran’s leaders may be inclined to incite a war that will hurry along the Islamic prophecy.

The situation of Hezbollah jihadists operating in Mexico — which has been known for years — is even more intolerable with Obama’s open borders.

I’ve added a few links below:

STEVE MALZBERG: Joining us now to talk about terrorism and and more importantly the main threat to US doesn’t really come from ISIS, Robert Spencer director of JihadWatch, that great organization and website, Vice President of American Freedom Defense Initiative and the author of the Complete Infidels Guide to Iran — there it is on your TV screen. Robert, good to see you sir.

MALZBERG: All right, so I’m an infidel you’re infidel. Now we have a guide to Iran, and and people need to realize as you point out in the book that it’s not — I mean ISIS, we know what ISIS is capable of — but it’s not ISIS that’s the main threat; the main threat when it comes to terror is Iran.

SPENCER: Very much so. Look ISIS mounts terror attacks in the United States. They call upon Muslims in the United States to kill American police, soldiers, civilians and they have gotten all too many Muslims to Eid, but Iran has a whole global network of terrorist organizations that it supports. Iran is what ISIS aspires to be in that regard, and they control Hizbollah, they fund Hamas, they fund Palestinian islamic Jihad and all these groups have cells in the United States and that is something that is going to become increasingly obvious in the near future.

MALZBERG: So what when you say that, right away I think of Iran and the nuclear deal, I worry about Iran as the threat to the US for launching an attack against our grid with an EMP attack —apparently we just found the book or a secret book of theirs, and it says that’s what they want to do so I worry about that, but you’re saying that cells of of groups that we usually think of as a threat to Israel for instance can also be a threat to us, here on our soil.

SPENCER: There’s no doubt about it. Hezbollah has a tremendous presence in northern Mexico and they are working with the drug cartels there. That’s why the drug cartels have started beheading people and things like that. They learned that from Hezbollah and Hezbollah is not doing that in order to target Mexicans; they are doing that to get people over the border to commit terror attacks here on a massive scale.

MALZBERG: All right, so when you talk about Iran and the kind of threat you’re describing what the heck do we do to stop it?

SPENCER: Well for one thing we have two in the first place clear out the Hezbollah activity in Mexico and we should be able to get the cooperation of the Mexican government theoretically to do that. We need to stop the Iranian nuclear program which means rolling back Barack Obama’s disastrous deal and make it very clear to the Iranians that any sign of nuclear activity will not be tolerated, and that we will be counting it every way we can and aiding in the Iranian opposition.

MALZBERG: When they say that they have ten thousand, a hundred thousand missiles ready to go at Israel, they probably do, no?

SPENCER: There’s no reason why not. After all they’ve got US taxpayer money to buy them and build them.

MALZBERG: So Benjamin Netanyahu has sworn over and over again publicly that Israel will defend itself. They did not for whatever reason, whether Obama would allow them to fly or Obama put the kibosh on it or they did not take out the nuclear reactors prior to this agreement, they let it fly, they let it slide, however you want to describe it. And now this is this threat exists, this existential threat to Israel’s survival: it exists today, it existed yesterday and it could exist tomorrow. Is it incumbent upon Israel to unilaterally take military action to to do whatever they can to take that out?

SPENCER: I think they’re going to have to, Steve, because it has been not only Obama but Bush before him that’s stopped them from acting against the Iranian nuclear program. The details are all in the book and so the problem is the United States in Iran’s nuclear program, and Israel is just going to have to act alone. I hope ultimately they decide to do so.

MALZBERG: And hopefully have the capability because that’s what Netanyahu keeps saying: we will defend ourselves. So when people pick up the Infidels Complete Guide to Iran, tell us, besides what we talked about, something that they might learn that they haven’t heard in this conversation.

MALZBERG: Oh, that’s because of their religious philosophy — Armageddon, the end of the world.

SPENCER: The 12th Imam, their savior figure, is only going to come back when the Muslims are persecuted — how else to bring that about — make sure the Muslims persecuted.

MALZBERG: So they would destroy Israel or launch those missiles — which I don’t see how it would not if they have a hundred thousand or ten thousand — I don’t see how it wouldn’t destroy Israel, and in return, they hope that they get hit and blown up and in their in their sick twisted minds of the ayatollahs and the religious fanatics in that country they all go to heaven.

SPENCER: And this is not a crazy theory — I have the president of Iran in The Complete Infidel’s Guide to Iran, I have the former president of Iran saying exactly that: “We could stand 10 to 15 million casualties” and then they think of course the 12th Imam will return.

MALZBERG: Wait — 30 seconds — why do you think nobody else talks about this except you and a select few others?

SPENCER: Most analysts discount entirely the role of religion in shaping public policy and yet that’s all the Islamic Republic of Iran is about.

It’s highly unlikely that Iran would nuke Israel as a stand-alone attack: such an extreme action would be part of a worldwide plan, with Iran activating its sleeper agents from Berlin to Tehrangeles and Dearbornistan.