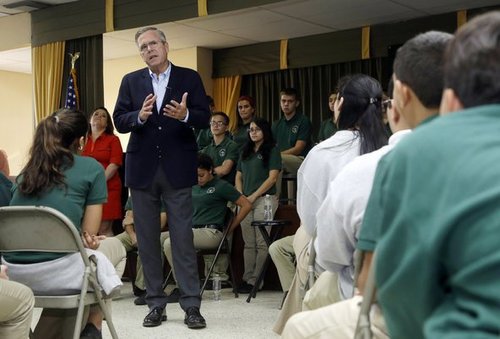 NYT: Encouraging Presidential Campaigning in a Single Language Is "Divisive"

A day after taking steps to warm relations with Hispanics, Donald J. Trump may have taken a step backward Wednesday when he suggested that Jeb Bush was setting a bad example by speaking Spanish.

“He’s a nice man. But he should really set the example by speaking English while in the United States,” Mr. Trump told Breitbart News in an interview.

This week, at an event in Miami, Mr. Bush said, “El hombre no es conservador,” making the case that Mr. Trump is not a conservative. The remark was part of Mr. Bush’s broader effort to aggressively confront Mr. Trump after months of weathering criticism from the billionaire tycoon.

Mr. Bush’s campaign manager, Danny Diaz, took to Twitter on Wednesday to scold Mr. Trump for being against the Spanish language and to accuse him of trying to destroy the Republican Party with his divisive language.

Jeb dividing his campaigning up into two separate languages is, of course, not divisive, it’s diverse! As we all known, divisive and diversity are antonyms. Therefore, people like Trump who encourage unity of the American political information sphere are divisive, while Jeb addressing different audiences in different languages brings us together by making it harder for us to monitor what he’s saying. Diversity enables divide and conquer, so diversity is therefore Good; while unifying the public to resist conquest is divisive and therefore Bad.