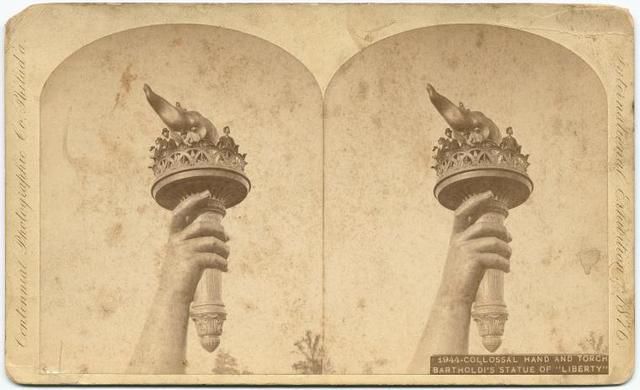 The Complicated History of Emma Lazarus’ “The New Colossus”

This week, yet another Trump administration official tripped up against “The New Colossus,” Emma Lazarus’ stirring 1883 sonnet, which was affixed to the pedestal of the Statue of Liberty in 1903.

And yet, as the right is ever-ready to point out, the poem has never reflected America’s actual laws. It was radical even when it was first affixed to the monument: “Emma Lazarus’ poem ‘The New Colossus’ was a political statement written against white supremacist political efforts in her day …

Uh, wasn’t it Lazarus’s friend from Richmond, VA, Constance Cary Harrison, the Betsy Ross of the Confederate Battle Flag, who persuaded Lazarus to write it? Lazarus’s family had had a lot of business ties to the Confederacy.

… I spoke with Princeton professor Esther Schor, who wrote an acclaimed 2006 biography of Emma Lazarus. Our conversation has been edited and condensed for clarity.

Rebecca Onion: When Emma Lazarus wrote this poem, in 1883, where was she, in her activism on behalf of Jewish refugees? What political context did the poem come from, for her?

Esther Schor: Lazarus was a fourth- or fifth-generation American from a very wealthy family. She was from a Sephardic family, which is to say she didn’t speak Yiddish; she spoke English at home. She was educated in her father’s library, a very upper-class young woman. She was made aware of the refugee crisis [of Jews fleeing pogroms in Russia] by people who were working with her at the American Hebrew Magazine. …

So, she was deeply involved with them, even though she didn’t speak a word of Yiddish and even though I have to say, as a kind of upper-class snob, she recoiled to some extent from these people who were very religious Jews, and they had an utterly different worldview from hers. But she taught them English, she worked at the Hebrew Immigrant Aid Society Employment Bureau, she advocated for them, and she started her own fund for them, then went to Europe to try to raise money for them, as well.

… So she was asked to contribute a poem, because of her work with refugees, to [a fundraising effort] to build the pedestal for the Statue of Liberty, in the fall of 1883. She at first demurs: “I don’t write on command”—but in her friend’s memoir, the friend wrote, “I reminded her about her work with the refugees, and it hit home.”

That was her Confederate friend who told her that.

So she writes this poem, and this is where she audaciously brings the demand to the American people on behalf of all the “tired and poor … the huddled masses yearning to breathe free.” …

1882 was also the year of the Immigration Act of 1882, and the Chinese Exclusion Act. I’ve been through Emma Lazarus’ letters many times, and I don’t see her commenting about either piece of legislation. I’ve looked. …

So, basically, Emma Lazarus was concerned about the anti-Semitic pogroms that began in Russia in 1881, and not interested in other people’s problems. Seems like sensible ethnocentrism to me …

But then the poem is eclipsed, so by the time the statue is dedicated in 1886, it’s not read aloud, it’s not published, it’s just not part of the conversation. And as you know, it wasn’t until 1903 when a friend of hers, just as a private venture to honor Emma Lazarus, undertook to commission a plaque with the poem on it, and put it on the pedestal.

Q. And when it was put up, was there an embrace of it, in the larger public sphere? Not so much, right?

A. Emma Lazarus was famous in that decade as a Zionist. And so the poems that were published, popularized, and anthologized of hers [at that time] were these Zionist anthems she wrote. “The New Colossus” was not one of them. It was not until the 1930s, after the anti-immigration legislation of the 1920s, when pro-immigrationists [most prominently the Slovenian-American journalist Louis Adamic] took the poem up as a kind of anthem. …

Louis Adamic was a Slovenian peasant who came to the U.S. at age 15 and got into leftwing activism. I’d never heard of him until now, so I doubt he was immensely influential.

Q. Between the 1930s and now, it somehow went from an interventionist poem, making an argument not everyone agreed with, to something that a lot of people think of fundamentally American. By 1986, you write in your biography, at the centennial celebration of the Statue of Liberty, the poem was uncontroversially included. So, sometime between 1930 and 1986, what happened to change its status?

A. The poem began as a subversive poem. It’s literally subverting the meaning of the statue that the French intended it to have, which was to honor French republicanism and abolitionism. So Lazarus single-handedly changed what the statue meant.

That subversive poem becomes a bourgeois piety, at a certain point. The Cold War had something to do with it—in essence, the Statue of Liberty becomes a symbol of American liberty, as opposed to fascism.

Irving Berlin set the poem to music and used it in “Miss Liberty” in 1949; the Statue of Liberty is also used in Saboteur, a 1942 Hitchcock movie. Then, “The New Colossus” is also taken up in the public schools as a recitation poem—it’s widely anthologized, read at civic gatherings. It’s hard to find a date, but I think the Cold War had a lot to do with it.

Nah, not the Cold War. Google’s Ngram of usage of “wretched refuse” in books shows it took off in 1939-1943, and then stayed at the same level through 2007 (the last usable date in the Ngram archive). This professor wrote her biography just before Ngram became available (c. 2009), so she didn’t have a chance to research this back then:

So the fame of “The New Colossus” was a World War II thing: This huge 1939-1943 spike probably had to do with concern for refugees from Nazism. E.g., the 1942 movie Casablanca is about refugees.

Basically, the poem was written in response to the Russian anti-Semitic pogroms of 1881 and finally became famous following German anti-Semitic Kristallnacht pogrom of late 1938.

I hadn’t realized that.

It’s almost as if the poem has been Culturally Appropriated.

And my sense is it’s recovering its subversive power now.

Q. Yes, I wanted to ask your perspective on the recurrent resurfacings of the poem in our debate over immigration. On the left, the impulse seems to be to correct anti-immigration Trump officials by making reference to this poem’s ideals. Yet, the poem has always been representative of a particular point of view on American immigration—not a consensus position. It seems hard to point this out without undermining the authority of sentiments I basically agree with!

A. … Think about it this way. What other left cause in this country, if we’re going to call immigration a “left” cause, which it is right now … what other cause has its poem? Where’s the health care sonnet, where’s the gerrymandering sonnet?

I feel a need for a gerrymandering sonnet.

Seriously, it feels like The Establishment is on the verge of going nuts over an extremist abstractly universalist misinterpretation mandating Open Borders of an understandably ethnocentrist poem.

In reality, Emma Lazarus and the people in the early 1940s who made her poem famous weren’t obsessed with letting everybody on Earth into America, they just wanted to help their own people who were under threat of state-sanctioned violence.

It’s time to respectfully make clear the ethnocentrism of Emma Lazarus and her fans.