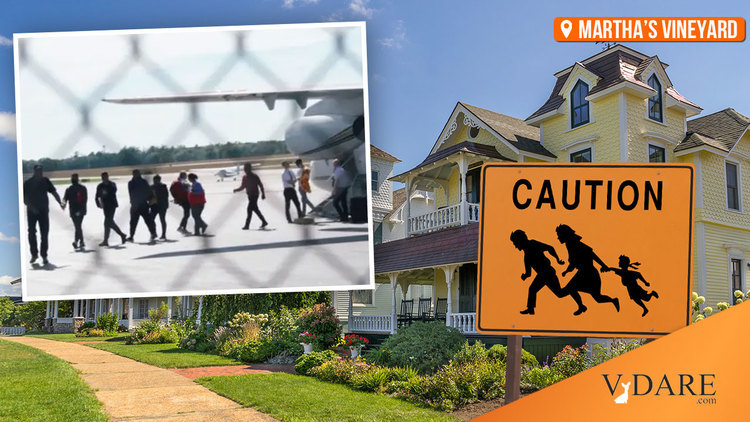 And the Treason Bar was quite happy with their performance. In fact, they literally had a playbook, and used that. But a strange playbook it was. These illegal aliens had already been released into the country, in fact, these Treason Bar shysters had ignored pleas for assistance from the unwashed masses arriving at the border under Biden. No surprise there, there was no publicity to be found at the border anymore. With Biden in office and the Biden Regime Administrative Amnesty underway, the word out was not to publicize immigration issues on the border. Contrast this with when the Treason Bar was rushing to the border, with considerable aid from smuggling groups, both domestic criminals and drug cartels. Why, because using kritarchs, the Treason Bar was trying to break the Trump effort on illegal immigration, much of which is based on my one column at VDare.com, where I pointed out that illegal aliens could be immediately and legally returned to Mexico to wait for their immigration hearings [More Options For Trump On The Caravan: Make Applicants For Asylum Wait IN MEXICO, by Federale, VDare, October 30, 2018].

But let us compare the response of the Treason Bar when Governor Ron DeSantis gave free airline tickets to illegal aliens.

The morning after dozens of migrants arrived unannounced last month on Martha’s Vineyard, immigration lawyer Rachel M. Self [Tweet her] raced to the island from a citizenship hearing in Lawrence. She was in emergency-response mode. While driving, she tuned into a Zoom conference with fellow immigration lawyers to discuss strategy. From Cape Cod, she hitched a ride on a newspaper delivery boat to get to the Vineyard, and then by noon she had hailed a taxi to get to the Edgartown church where the migrants had spent the night…

“There’s definitely an activist, legal culture here in Boston,” [Lawyer Susan] Church, 52, [Tweet her] said in an interview. “We spent four years doing this exact type of emergency response under the Trump administration, and we became really good at it.”

When the migrants landed on Martha’s Vineyard, there was no hesitation, Church said. “We just had a playbook, and we played it.”

[When Migrants Were Sent To Martha’s Vineyard, A Spirited Team Of Massachusetts Lawyers Jumped To Help, by Tonya Alanez, Boston Globe, October 7, 2022]

The Treason Bar is claiming that this particular group of illegal aliens were all assigned a free attorney. Now, I think that is a lie: very few illegal aliens get free attorneys. How it usually works is that an attorney meets with an illegal alien, offers free legal advice on an immediate issue, but later on informs the illegal alien that further representation will cost money. Now many of these attorneys are acting pro bono as part of their duties with the Big Law Treason Bar, but immigration work is labor and court-time intensive, so most of the free legal work is temporary, related to high profile cases or only for a short period of time as benefits the political goals of the attorney.

An important aspect of this is that these very concerned Treason Bar shysters were not at the border, meeting with recent illegal entrants and offering to represent those illegal aliens for free. These shysters did not become concerned until these illegal aliens showed up in Martha’s Vineyard, where lawyer Rachel M. Self is actually a resident. It is not as if there was any legal issue at stake: the Treason Bar had already passed on representing these illegal aliens when they arrived in Texas. But, suddenly, they had to be represented. Why, no real reason other than the politics of shipping illegal aliens to Democrat-run sanctuary cities. According to the Treason Bar, illegal aliens who enter illegally no longer need free representation, but get a free ticket to Martha’s Vineyard, and suddenly there is an injustice that must be addressed.

Which brings us to the next step, in this case the Treason Bar’s shift to another tack—these illegal aliens are now crime victims and deserve a green card because they accepted a free flight to Martha’s Vineyard. And claiming to be a crime victim, for immigration purposes, does not need an actual crime to have happened, nor does it require that a criminal be arrested, or a criminal indicted, only that there be “certification” from a prosecutor or law enforcement officer—in this case a Mexican-American Sheriff in 61% Hispanic Bexar county—that a crime happened. Then the illegal alien gets a green card.  This also tells us that the asylum claim that underlies the fact that these illegal aliens were released at the border and not immediately deported back to Mexico is obviously fraudulent.

A Texas sheriff has certified that the nearly 50 migrants flown to Martha’s Vineyard by Florida Gov. Ron DeSantis were victims of a crime. That certification is a key step in qualifying them for a special visa they would not have otherwise been eligible for.

Texas’ Bexar County Sheriff Javier Salazar expeditiously signed certification forms for all of the migrants, according to Boston-based immigration attorney Rachel Self, who went down to San Antonio to obtain the paperwork.

“Based upon the claims of migrants being transported from Bexar County under false pretenses, we are investigating this case as possible Unlawful Restraint,” Salazar
said in a statement to GBH News. “We have submitted documentation through the federal system to ensure the migrants’ availability as witnesses during the investigation.”

The documents are key parts of applications for U-visas, which are reserved for crime victims, or people who witnessed crimes. Immigration attorneys like Self are seeking these visas for the mostly Venezuelan immigrants on the grounds that they were brought to the Vineyard under false pretenses.

These Non-Immigrant Visas (NIV) lead eventually to green cards, then U.S. citizenship; the U NIV is part of a group of such visas, the T NIV for “victims” of alien smuggling and the S NIV for witnesses and informants, originally just for informants in terrorism cases, but now for any crime. The U and T NIVs are highly abused, with the U NIVs mostly for those falsely reporting crimes or claiming to be victims of minor crimes like petty theft as justification for the visa, while the T NIV is mostly used by prostitutes and strippers to get green cards.

This is a perfect opportunity for the Republican majority in Congress to end the S, U, and T NIVs.