The Root is a webzine for black people, a 21st century equivalent of Jet or Ebony magazine. (Any similar publication openly aimed at white people can expect to be demonized as a hate group.)They've produced a piece of anti-nostalgia here,about the old days of oppression: 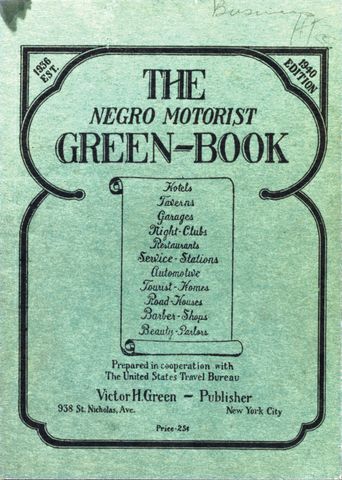 (The Root) — In 1936 a Harlem postal worker and activist named Victor H. Green decided to develop a guide that would help African Americans travel throughout the country in a safe and comfortable manner. The Negro Motorist Green Book (also called The Negro Travelers' Green Book), often simply known as The Green Book, identified places that welcomed black people during an era when Jim Crow laws and de facto segregation made it difficult for them to travel domestically without fear of racial backlash.

The Green Book listed businesses and places of interest such as nightclubs, beauty salons, barbershops, gas stations and garages that catered to black road-trippers. For almost three decades, travelers could request (for just 10 cents' postage) and receive a guide from Green. Eventually the guide expanded to encompass information about Canada and Mexico.

Like users of today's popular recommendation sites such as TripAdvisor, travelers collected information during their journeys, which they shared with Green and his team of editors. The data were then incorporated into future editions. "Historically, The Green Book falls in line with the underreported activism of black postal workers and the heightened awareness of driving while black in certain regions of the country," says Robert Smith, associate professor of African-American and civil rights history at the University of Wisconsin-Milwaukee. "Although many think of this book in historical terms, the challenges facing black travelers then resonate with black travelers now, particularly as it relates to racial profiling and stop-and-frisk laws."[More]

Travel, especially in the South, was a genuine problem for Northern blacks in those days, as you can read in the memoirs of Colin Powell, Walter Williams, and Thomas Sowell. But now things are different, and maybe it's non-blacks who need a guide like this, in the form of a smartphone or GPS app.

In fact, there has been something like this developed—Microsoft's "Avoid Ghetto" app. Microsoft didn't call it that, but when they  patented a way to allow your GPS to warn you of high crime rates ahead, the way it will warn you of traffic, and "Bridge out" then everyone else called it that and it was pretty brutally criticized as racist, by among others, The Root—the same people who are so nostalgic about the Green Book.