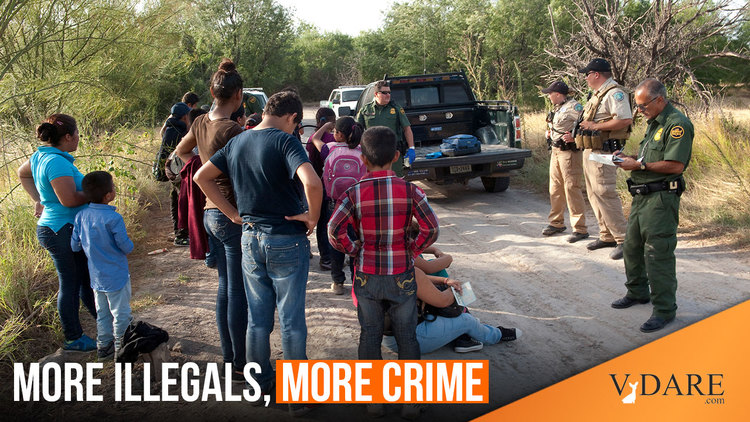 Transient Populations Of Immigrant Hispanics Are Bound To Mean More Crime, Even If They're Somehow Legal

Earlier, December 2019: Tom Homan Predicts The Border Will "Collapse" If Democrats Win In 2020

He points out that instead of getting criminal aliens off the street, the illegal aliens are just released back into the same communities again, where they re-victimize the locals. This contributes to the gang problem.

However, in my opinion, Homan ignores a larger issue. When I was studying criminal justice, our professor told us about a study that compared two poor neighborhoods. One had a high crime rate and the other did not. The study found that the major difference between the two was transiency. The neighborhood with the high crime rate had many rental units with people moving in and out of them on a regular basis. The neighborhood with the low crime rate had neighbors who had been entrenched in the neighborhood for years. Because the neighbors in the first community often did not know each other, they also did not look out for each other. Plus, if they saw someone carrying a TV out of an apartment, then they might not be sure if someone was moving again, or, they didn't want to stick their neck out for a stranger.

When I was in college, on almost the last day of classes before summer break, I had my apartment broken into. The police suspected it was fellow college students, possibly from out of state, who themselves intended to be long gone by the time the burglary was discovered. (The college was largely white with some Hispanics at the time.)

So, even if you want to disregard different crime rates among races, you would expect an increase in lawlessness with a great increase in a transient population moving through the United States. The migration allows the cartels cover for smuggling narcotics by tying up the Border Patrol Agents and that makes it more difficult to pick up human traffickers and rapists. A rapist can rape a woman in a migrant camp and be gone into points unknown in the United States the day after.

I do find it quite ironic that do-gooder organizations like Catholic Charities coordinate with the Mexican drug cartels in smuggling migrants. These holier than thou types ally themselves with some of the worst murderers because they believe the only solution for South American poverty is to get the “victims” on the Magic Dirt that is the United States.