The reprehensible deal has been done in secret over weeks of negotiation. The Republicans caved to Democrats' demands on behalf of La Raza and other Marxican fifth columnists. Senators plan to rush the 1000-page, nation-shredding bill through the Senate next week.

First of all, it's a pipedream that there are only 12 million illegal aliens. Bear-Stearns estmated several years ago that there were probably 20 million and many more have entered since then. The number could easily be 25-30 million.

It's a terrible sell-out as well as stupid. All the major mistakes of the 1986 legislation are repeated. There's no tough enforcement, just carrot with the pretense of a stick. The usual lying scum stepped up to spin their BS, like Sen. Arlen Spector who said, "It is not amnesty. This will restore the rule of law."

Of course it's amnesty. When you reward, rather than punish, a lawbreaker for his anti-social deeds, it's amnesty. Yeah, the Senate legislation will scare them from illegal immigration in Guerrero.

A more realistic Senator Grassley remarked on Lou Dobbs, "You know what I found out? If you reward illegality, you get more of it."

Also in the sanity camp is Rep. Ed Royce from southern California, who appeared on Dobbs today:

REP. ED ROYCE, (R) CA: Well, it is [a complete sellout]. And it's a mockery of the rule of law and if we go back to the 1986 amnesty, it is the same logic, the same reasoning we heard at the time. That if massive amnesty is granted, somehow there's going to be enforcement. We saw no enforcement of the employer sanctions then, what we saw was a tripling of the amount of illegal immigration as a result of that '86 act after it was passed and that's what we're going to see that here, Lou. [...]

In terms of the employer sanctions already on the books, Lou, those are not being seriously enforced. So the enforcement component of this is not going to happen. But in addition to the amnesty, we have an increase in legal immigration of three quarters of a million people. We have the new guest worker program and the entire cost of this is $2.4 trillion. On the American taxpayer.

You are at war with Mexico. They are deliberately using massive immigration to conquer your territory, and your "leaders" are kneeling. It's just as Muslims are doing in Europe, only without the terrorism. In future encyclopedias it will say: USA: "Nation that existed until the 21st century. Had the strongest armed forces in human history. Was conquered and colonized by unarmed Mexicans between 1980 and 2030." 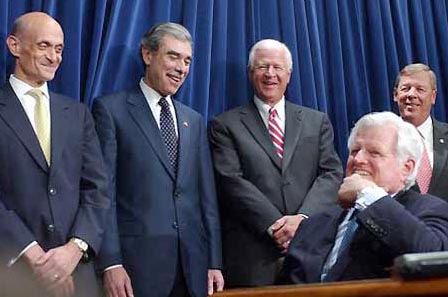