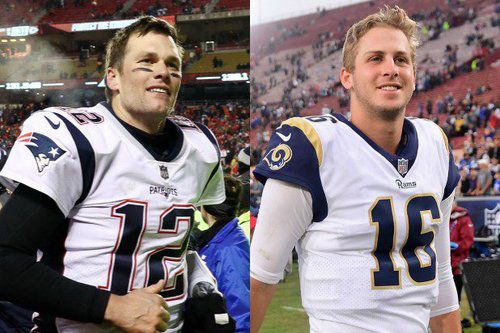 Patriots’ quarterback Tom Brady is a graduate of Junipero Serra HS in posh San Mateo, CA and Rams’ QB Jared Goff is a graduate of Marin Catholic HS in Marin County, CA, two of the nicest suburbs in the country. As Kingsley Amis said in Lucky Jim, there’s no end to the ways that nice things are nicer than not nice things.

If you ask me, newspaper reporters are created at age six when they first go to school. In the schoolyard boys immediately divide into two types. Immediately! There are those who have the will to be daring and dominate, and those who don’t have it. … But there are boys from the weaker side of the divide who grow up with the same dreams as the stronger … The boy standing before me, John Smith, is one of them. They, too, dream of power, money, fame, and beautiful lovers. …

Boys like this kid grow up instinctively realizing that language is like … a sword or a gun. Used skillfully, it has the power to … well, not so much achieve things as to tear things down—including people … including the boys who came out on the strong side of the sheerly dividing line.

Hey, that’s what liberals are! Ideology? Economics? Social justice? Those are nothing but their prom outfits. Their politics were set for life in the schoolyard at age six. They were the weak, and forever after they resented the strong. That’s why so many journalists are liberals! The very same schoolyard events that pushed them toward the written word … pushed them toward “liberalism.”