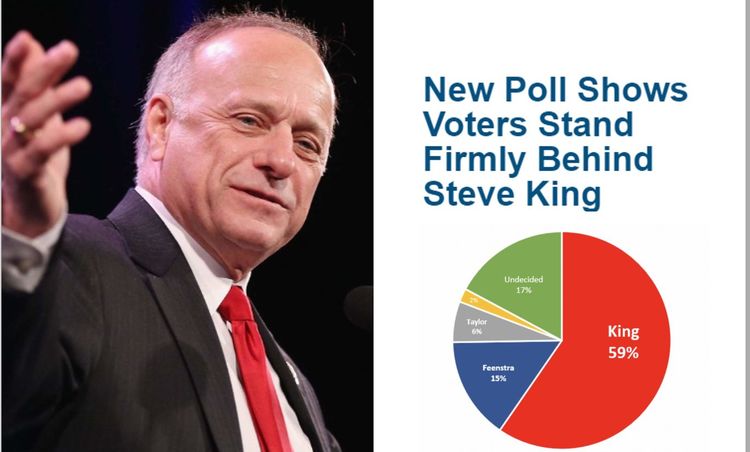 “I’m not the one that’s vulnerable here any longer,” King said. “[Iowa Sen.] Joni Ernst is the one we need to stand behind and get behind and that’s why we have to unify this party and the sooner we do it, the stronger we are going to be.” [King says Ernst is the vulnerable 2020 candidate, not him, Radio Iowa, October 14, 2019]

A new poll shows King is right to feel confident, in spite of the Republican establishment’s desire to get rid of him.

King maintains a strong lead over his four primary challengers, according to an internal poll conducted by his campaign.

A new poll shows me beating my 4 primary opponents 59% to their combined 23%! Thank you 4th District Rs! You’ve seen through the NY Times #FakeNews attacks on me and the attacks on @RealDonaldTrump. Annoy the times: re-elect King and Trump. #MAGA

The 59 percent lead shows the vast majority of voters are sticking with King and none of his challengers stand out as the main guy to take him down. The poll also found that 70 percent of King’s constituents approve of him and 74 percent take his side in his media-driven controversies. [Steve King says internal poll shows him with big lead in congressional primary, by Bret Hayworth, Sioux City Journal, October 7, 2019]

King’s salty opponents dismissed the poll as “fake” and a “liberal tactic.”

This poll demonstrates King’s ability to win re-election against his own party’s establishment. The Watcher covered his situation last month and concluded he can win. Normal Iowans don’t care about the racism accusations and media hysteria; they like what King is doing and agree with his immigration patriotism.

As long as King wins the party’s nomination, he’ll have an easier time in the 2020 general election. Trump will be at the top of the ticket and the congressman represents a deep-red district. National Republicans will suck it up and back King against a Democrat.

Sen. Joni Ernst is one of those Republicans. She’s staying out of King’s primary race and her campaign implies she’ll support whoever wins that contest.

King doesn’t have the resources or the national backing he had in past elections, but that might not matter. What matters more is what Iowans think of him—and they stand with King.