To Bloomberg News, Enforcing The Law Is "Borderline Crazy" 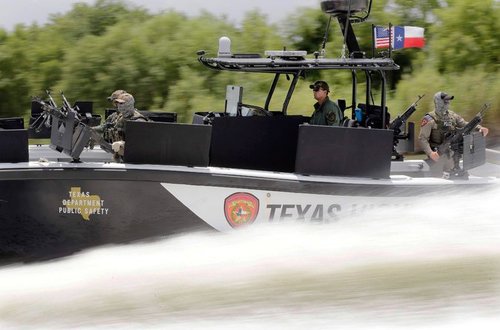 If you're worried about the militarization of American police, don't worry about these guys—they're standing between the Mexican cartel gunmen (not to mention the Mexican military) and the citizens of Texas. Allan Wall explained last night how serious enforcement by the agencies under the control of the Governor of Texas could protect America from the ongoing invasion: Memo From Middle America |Texas’ Rick Perry Could Seal The Border Himself—If He Had The Will.

Texas has poorly funded schools and more citizens without basic health insurance than any other state, but it has spent $500 million on border operations since 2005. The federal government's budget for immigration control is around $18 billion. These vast outlays haven't produced the desired security.

Texas's "poorly funded schools" are overwhelmed by illegals—and many of the "citizens without basic health insurance" are citizens of Mexico.

That's the real threat. Bloomberg News feels that "U.S. border cannot be sealed without the nation becoming a totalitarian dystopia" and notes that

Sometime Republican presidential candidate Mike Huckabee said the United States could simply wall off the border, like Israel and the West Bank - not, you might think, the most compelling model.

Seems compelling to me. While an unsigned pro-immigration editorial at Bloomberg News is supposed to represent the views of Michael "Billionaires for Open Borders" Bloomberg, the editorial writer who actually wrote it should know that Bloomberg doesn't feel that way about the Israeli Border:

Every country has a right to defend its borders from enemies, and Israel was entirely justified in crossing into Gaza to destroy the tunnels and rockets that threaten its sovereignty. I know what I would want my government to do if the U.S. was attacked by a rocket from above or via a tunnel from below; I think most Americans do, too.

Texas has 1200 miles of border—the West Bank fence will be 430 miles when it's completed, and Israel-Egypt border is another 245. Texas could easily build 1200 miles of fence.