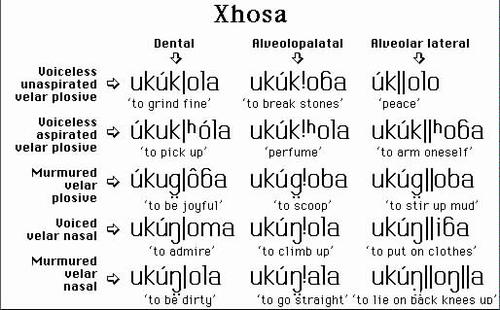 Ticketed By The Phonetics Police

An exceptionally punctilious reader has chidden me for rendering the first consonant of "Xhosa," in my weekend column, as a "k" sound.  It is actually, he points out, a lateral click, like the giddy-up sound you might make to the horse pulling your cart.

That's quite true, and I knew it, but I didn't want to further lengthen an already-too-long article by adding instruction in exotic phonetics.

The Xhosa do indeed use clicks in their phonetic repertoire.  You can hear them used here, or sung here.

Which is itself a curious thing, linguistically speaking.  You'd think that clicks would be difficult for anyone not currently using them to pick up.  Apparently the Xhosa did pick them up, though.

The ancestors of the Xhosa were West African Negroes, one of the 4½ big original populations of sub-Saharan Africa.

(That's according to Colin McEvedy's Atlas of African History, which I rely on for this kind of thing.  The other 3½ groups were the Pygmies, the Nilo-Saharans, the Bushmen, and the Cushites.  The Cushites may have been settlers from West Asia, though, interbred with Nilo-Saharans: I don't know if the geneticists have sorted this out since 1980, the publication date on my copy of McEvedy.)

As I said in my article, these Negro ancestors settled Southern Africa some centuries ago, partially displacing the native Bushmen.

We know from glottomorphology that the ancestral Negro languages did not have clicks.  The (unrelated) Bushmen languages do, though; so the incoming Xhosa must have picked up the clicks from the Bushmen.

Have I done sufficient penance there for a very minor phonetic simplification?  Good.

The existence of click languages is not astonishing.  Pretty much any sound that can be made with the vocal tract is used by some language, somewhere, at least some of the time.

Abnormal air-stream mechanisms are also used in special circumstances.  It is possible to compress air within the cheek-space and use it to carry speech—so-called buccal voice, most well-known through the voice of Walt Disney's Donald Duck.  [The Cambridge Encyclopedia of Language by David Crystal, Ch. 22.]

Seems to me that particular sound should properly be called "duckal," not "buccal" . . . but I guess the phoneticists know what they're doing.

If there is a genuine language somewhere that includes buccal sounds in its phonetic inventory, I'd very much like to hear a sample of it.  I tried Youtube but all I got were brushtail possums courting and guys doing Donald Duck imitations.