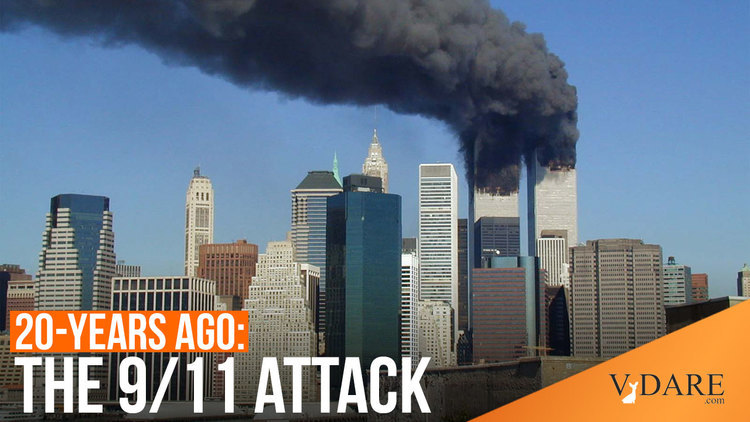 Earlier: Did 9/11 Elect Donald Trump? Has He Noticed?

It's the twentieth anniversary of the 9/11 Attacks in 2001. This seems rather poignant in the wake of the Afghanistan debacle, which is paving the way for the importation of scores of thousands of Afghans to the United States, which might lead to more terrorist attacks.

Where were you on 9/11 when you heard the news? I was at the school where I was working in Mexico when I heard about it.

Of course, the 9/11 Attacks didn't teach our rulers anything. They didn't tighten our immigration system, and they didn't set up an Israeli-style airport security system. (My article ten years ago, on the tenth anniversary of 9/11 was entitled Ten Years After 9/11—Can We Have Israel-Style Airport Security Profiling Now, Please? We still don't.)

In 2021, there's even a point of view floating around out that the January 6th Capitol incident was worse than 9/11. That’s what Pam Keith says, and she may wind up in Congress, as she's running to represent Florida's 18th District.

The candidate tweeted this: "On 1/6/2021, 9/11/2001 ceased being the worst thing that happened to America in my lifetime. It’s really weird and painful to process and say that. But it’s the truth. And quite frankly… it’s not even close."

President Biden, and former Presidents Obama and Clinton were in attendance at the commemoration at Ground Zero.

Former president George W. Bush spoke at Shanksville, Pennsylvania, where he used 9/11 (which occurred under his watch) to attack “violent extremists at home" who he says must be confronted. Shameful.

Former president Donald Trump used the date to visit police officers and firefighters in New York City, and appears to have been quite well-received by them.

The New York Times wasn't impressed. Katie Rogers' article on the subject was entitled Where's Trump on 9/11? Not at ground zero.

From the Gray Lady:

Notably absent from the 9/11 memorial ceremonies on Saturday [Sept. 11] was former President Donald J. Trump, a native New Yorker who built much of his political brand in the divisive aftermath of the attacks. Mr. Trump was in New York City, his spokeswoman said, but was not planning to visit ground zero. “He had the option to attend but decided to honor the day with different stops,” his spokeswoman, Liz Harrington, said...Mr. Trump spoke at a police precinct and a firehouse in Manhattan, reviving his criticism against Mr. Biden’s decisions in Afghanistan and delivering his usual campaign fare about crime in cities led by Democrats.

At the fire station Mr. Trump visited, Engine 8 in TriBeCa, one firefighter in uniform wore a Make America Great Again hat as he posed beside the former president. A Fire Department spokesman, Jim Long, said that wearing clothing with political messaging while on duty was against department rules and that the infraction “will be addressed.” He did not elaborate.

The New York Post, on the other hand, didn't bash Trump over the visits. Its article was entitled Trump makes surprise visit to New York police and firefighters on 9/11 (by Jon Levine, Joe Marino, Larry Celona, Tina Moore, Sep. 11, 2021). It includes photos and a video of Trump hamming it up with the police. The police and firefighters seemed glad to pose in photos with Trump, who was in his element. (Group photo here.)

The former president was even asked if he might run for mayor.

If you think about it, the New York City police officers and firemen were the true heroes of 9/11.

It certainly wasn't George Bush, whose anti-profiling policies made it easier for the attack to occur. See Steve Sailer's Lest We Forget: "Bush Had Called For Laxer Airport Security" And "Political Correctness Saved Mohammed Atta (And Doomed Thousands).

It certainly wasn't the Bush administration's Transportation Secretary Norm Mineta, a Japanese-American still living in the past, who even after 9/11 refused to profile Arabs. See Ann Coulter's classic Mineta's Bataan death march .

And it certainly wasn't Maine ticket agent Michael Tuohey, who on 9/11 suspected Muhammed Atta but rebuked himself and said nothing, thus allowing 3,000 people to die. After all, letting 3,000 people die is not as bad as being a "racist". See the late Lawrence Auster's Ticket Agent "Embarrassed" About his Suspicions of Atta.