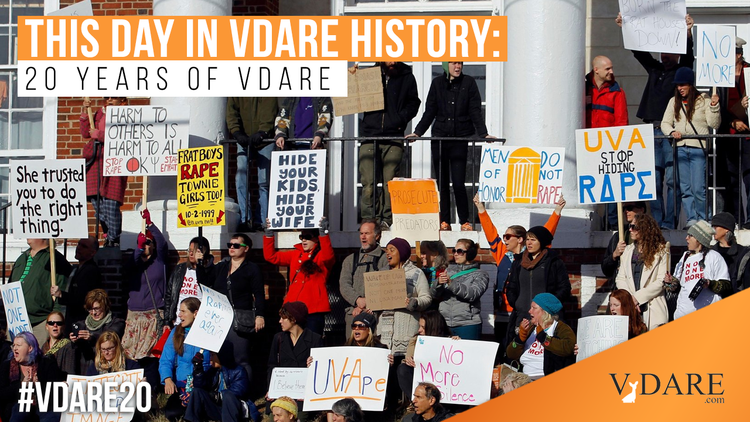 Originally published here on VDARE.com on this day in 2014.

In any case: good work, men.

Three friends of the alleged University of Virginia rape victim are growing more skeptical about her account, saying they have doubts about information she gave them and why she belatedly tried to get herself deleted from the Rolling Stone article that engulfed their campus in controversy.

The friends say among their concerns is the fact that the woman, named only as “Jackie” in the article, gave them a cellphone number so they could text a man she said she was seeing around the time she alleged she was gang-raped at a fraternity house.

Eventually, the friends ended up with three numbers for the man. All are registered to Internet services that enable people to text without cellphone numbers but also can be used to redirect calls to different numbers or engage in spoofing, according to multiple research databases checked by The Washington Times.

“That definitely raises some red flags,” Alex Stock, a University of Virginia junior and friend of Jackie, told The Times. “I think as more details come out I definitely feel a little more skeptical. This is all new territory for me. I’m not too technologically savvy.”

The friends say Jackie also gave them the name “Haven” as the first name of the upperclassman she was seeing shortly before the purported attack, but they haven’t been able to find anyone by that name enrolled on the campus or even living in the area.

Kathryn Hendley explained that the three friends began using the phone numbers to text Haven because they were “curious” about the upperclassman. Now, they don’t know what to think about that part of her story, the friends said.

When told the cellphone numbers were traced to the Internet services, Ms. Hendley remarked: “Wow, really? That’s interesting. It’s news to me.

“I think as the story has moved along it has raised some new doubts. I honestly wish I could just talk to her sometimes and ask her myself or at least tell her that I hope she’s all right,” she said.

Ryan Duffin, another junior, said he was trying to keep an open mind about Jackie’s accusations, but the cellphone numbers added to his own skepticism.

He noted that Jackie told him she tried to get herself dropped from the Rolling Stone article at the last minute, but was told by the magazine that it was too late.

“She was contacted thinking her story was going to be a much smaller piece about the issue as a whole as it existed at U.Va., and that it was much more focused on survivors,” Mr. Duffin told The Times. “There came a point when she didn’t want that anymore, she tried to retract, but the reporter said at that stage it wasn’t possible.

“She said that she thinks the article did get out of hand and that the reporter used her story to make a broader point,” he said.

All three friends nonetheless remain cautiously supportive of Jackie, saying only she and others at the fraternity house ultimately know what happened on the night of Sept. 28, 2012, when she alleges she was attacked.

Which fraternity house? Did Jackie ever settle on which frat house to go use?

“As the investigation goes on, more and more aspects of the story are coming into question; the aggregate of all this evidence is increasing doubt. But it doesn’t change my opinion that it may or may not have happened,” Mr. Duffin said. “More and more is coming to the surface, and I think there will come a time when we know what really happened, especially since I know there is a police investigation.” …

Internet phone numbers enable the user to make calls or send SMS text messages to telephones from a computer or iPad while creating the appearance that they are coming from a real phone. They also let users create multiple, untraceable phone numbers for little or no cost while concealing their true identity.

The friends said they believed that Jackie may have had a crush on Mr. Duffin but that he was interested only in friendship, and that the mystery upperclassman entered the picture shortly afterward.

Mr. Stock told The Times that Jackie was “extremely sad” that Mr. Duffin would not escalate their relationship beyond a friendship. A few days later, Jackie told her three friends that she had an admirer in her chemistry class, the upperclassman she called Haven.

Mr. Stock said Jackie “was receptive to the whole idea” of the three texting with her new admirer, but noted that he found it “suspicious” that during the text exchanges, Haven “would always steer the conversation back to Ryan.”

Mr. Duffin said his experience texting with Haven was similar.

“He just told me he really liked Jackie, but that she wouldn’t give him a chance because she liked someone else. It didn’t take me long, based on what he was texting, to figure out that the someone else he was referring to was me,” he told The Times. …

The Times called all three numbers supplied by the friends. The third ‘BlackBerry’ number was forwarded to a voice mail with a female voice asking the caller to leave a message, and the other two were “not in service.”

The BlackBerry number also came through on Mr. Duffin’s cellphone as a regular 10-digit phone number, but also ended with a suffix, @textfree.us, a domain address associated with Pinger.

On Pinger’s home page, the company writes, “Pinger gives you your own real phone number so you can call or SMS [text] any phone, even if they don’t have Pinger. Call or text from your phone, iPod, iPad or computer.” Another page says, “Free texting from the Web — get a free texting number, send free unlimited texts.”