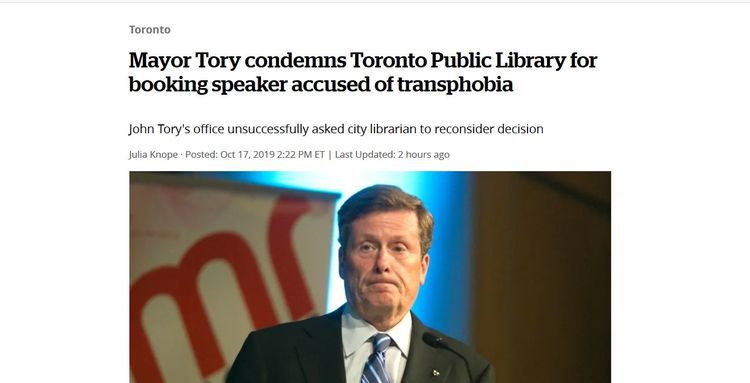 They're Not Making John Torys Like They Used To

I was not aware that the mayor of Toronto is named John Tory, which is kind of like an English enlisted soldier being named Tommy Atkins.

spoke out against the Toronto Public Library for refusing to cancel a controversial event set for Oct. 29.

Mayor John Tory says he is “disappointed” in the Toronto Public Library’s refusal to cancel an event featuring a speaker who has made controversial remarks about transgender women.

“I don’t agree with the decision,” Tory said in a press release Thursday.

“I’m disappointed in the Toronto Public Library’s decision to allow this talk to go ahead on its property.”

Tory isn’t the only one with concerns.

Jill Andrew, NDP MPP for Toronto-St. Paul’s, says she was “dismayed” to learn of the library’s refusal to cancel the event.

“A person who publicly espouses hate speech should not be given a platform to disseminate their views at a publicly funded institution such as the TPL,” Andrew said. …

In a written statement to CBC Toronto, Murphy said women and girls around the world have concerns about the “impact of gender legislation” and deserve to be heard.

“It is unconscionable that the mayor of Toronto would attempt to pressure the TPL to cancel this event,” her statement reads.

“What I am saying is not controversial, and certainly is not hateful … We deserve space for this conversation and our concerns deserve respect.”