"They Only Come to Work" — A Refutation 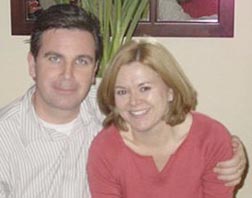 Last April, suburban housewife and mom Mary Nagle (shown here with her husband Daniel in a happy moment) was brutally raped and killed in her own home by an illegal alien hired to do some painting prep work

NEW CITY, N.Y. — A prosecutor described in nightmarish detail Thursday the rape, mutilation and killing of a suburban housewife, allegedly at the hands of a worker who was supposed to be power-washing her deck.

The assault on 42-year-old Mary Nagle was so brutal that crime-scene investigators found a piece of her ear and hanks of her hair scattered around her bedroom, Rockland County District Attorney Michael Bongiorno said at the start of the defendant's trial. One of the victim's fingers was nearly amputated as she tried to fend off her attacker. [Prosecutor describes housewife's rape, killing in grisly detail, Newsday, March 24, 2006].

After killing Mary Nagle, Guatemalan citizen Douglas Herrera changed into clean clothes belonging to Daniel Nagle and used Mary's cell phone to call 51 people on the phone's internal list. Many family and friends learned of the horrendous crime from the killer himself, who also threatened them.

As is common in many of these cases, the killer had a prior arrest that should have sent him back to his nation of origin, but he was allowed to stay, with tragic results.

News of the crime cooled the enthusiasm of many area homeowners for hiring total strangers from foreign countries. "The lady told me, 'Pablo, I don't want to see you today,' " said Mr. Sandoval, an "immigrant" laborer.

To see the faces of American crime victims and the illegal alien criminals streaming across our borders, have a look at Immigrations Human Cost.