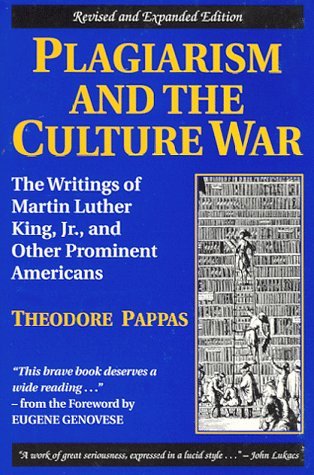 Steve asks, below "Anybody remember how GREs were scored 70 years ago?"

I don't, but we have the benefit of Theodore Pappas's scholarship, as published in Chronicles and in his book Plagiarism and the Culture War: The Writings of Martin Luther King Jr. and Other Prominent Americans.

Pappas is the man who exposed the fact that Martin Luther King's PhD. dissertation was plagiarized, and that multiple MSM and academic sources had known this, but refused to publish it.

King received a Bachelor of Divinity from Crozer Theological Seminary, a Northern Baptist seminary which had first graduated a black student in 1937. Crozer’s Professor Morton Enslin wrote a letter of recommendation for MLK to Boston University, from which King would graduate with a fraudulent (because his dissertation was plagiarized) PhD.

King was recommended for doctoral studies for reasons other than intellectual distinction and academic achievement. In fact, we know from King's scores on the Graduate Record Exam that he scored in the second lowest quartile in English and vocabulary, in the lowest ten percent in quantitative analysis, and in the lowest third on his advanced test in philosophy — a subject critical to the topic of his doctoral thesis. Instead, King was recommended for doctoral studies because he socialized well with white students, had won white support and approval, could be of “useful service” in the future, and, so far from displaying any of those “annoying qualities” that other Negroes exhibited (whatever this means), had even showed a disdain toward Negroes of a lower socioeconomic order. It was clearly on the basis of race and class, [King was member of Atlanta’s middle class] not scholarship, that Enslin recommended King for doctoral studies.

The possibility that King benefited from white paternalism or from an early form of affirmative action — from a lowering of academic standards or from preferential treatment because of his race — gains credence when his years of plagiarizing are considered.

I may add that while various neoconservatives are fond of quoting King's famous quote about the "content of their character" as an argument against affirmative action, King himself was not only a beneficiary of Affirmative Action, but a supporter of it. See Martin Luther King Jr. explicitly supported what's now called affirmative action, by Jarvis DeBerry, Nola.com, April 29, 2014.

I wrote this up myself last year, see On Martin Luther King's Non-Conservatism: The Quota King.