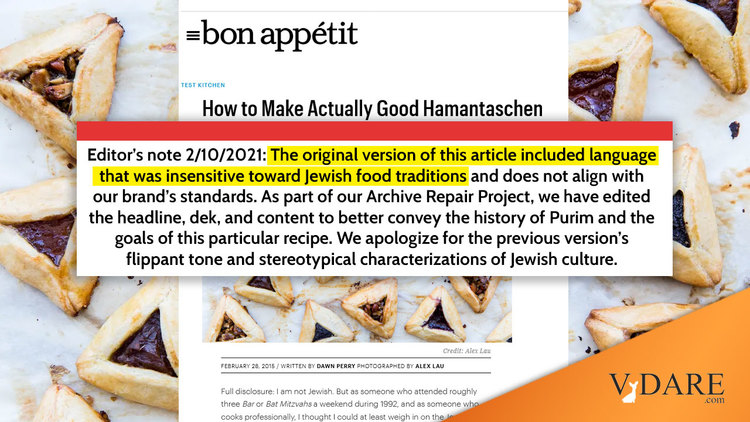 The last old-fashioned physical magazine I can recall picking up and reading is a copy of Bon Appétit at the dentist’s office. I was reminded that a physical magazine can be a glorious physical artifact. The pictures were beautiful, of course, and the writing had plenty of personality. “Wow,” I thought, “This is a really good magazine. I know less about food than practically anybody, yet even I find it delightful.”

But all good things must come to an end, so Bon Appétit’s Jewish editor got fired not long ago because it was discovered that in 2013 his wife had posted a photo on social media of him and her dressed up as Puerto Ricans at a 2004 Halloween Party (or something like that). Eventually, Condé Nast hired a black woman to replace him because that’s what you have to do these days.

Now, under the new regime, Bon Appétit has hired a firm to go through their old archives and change them to fit the new party line, like Winston Smith’s job at the Ministry of Truth.

For example, here’s the original version of a 2015 article offering a new recipe for a traditional cookie:

How to Make Actually Good Hamantaschen

Full disclosure: I am not Jewish. But as someone who attended roughly three Bar or Bat Mitzvahs a weekend during 1992, and as someone who cooks professionally, I thought I could at least weigh in on the Jewish cookie department.

Hamantaschen are a triangular-shaped cookie made to commemorate the Jewish celebration of Purim. The story of Purim involves a bad guy, Haman, a nice Jewish lady, Esther, and her ultimate victory over his plot to destroy the Jewish people. Hamantaschen are shaped to resemble  Haman’s 3-cornered hat and traditionally stuffed with sweet fillings made of poppy seeds, dried fruits, or fruit preserves (among others). Sounds tasty, right? But upon reflection, Jews and non-Jews alike on the BA staff could only call up childhood memories of dry and sandy hamantaschen that left your mouth coated with a weird film. “The filling was the thing that you thought might save it, but there was never enough,” says assistant editor Amiel Stanek. “And when you did get to the center, it was jam all the way up to the top,” senior editor Meryl Rothstein chimes in. Point being, it was an imbalanced cookie experience.

So I set out to convert the haters. To create a hamantaschen that we could all enjoy, regardless of religious upbringing or tainted Hebrew School memories. I wanted to create a cookie in which the cookie itself was a pleasure to eat, whether or not you encountered filling in each bite. I wanted fillings that were moist even after baking, but not too sweet. Here’s how to nail it:

And then goes on to give detailed instructions on how to bake this new improved cookie.

But now the article has been bowdlerized as part of Conde Nast’s Orwellian Archive Repair Project:

Editor’s note 2/10/2021: The original version of this article included language that was insensitive toward Jewish food traditions and does not align with our brand’s standards. As part of our Archive Repair Project, we have edited the headline, dek, and content to better convey the history of Purim and the goals of this particular recipe. We apologize for the previous version’s flippant tone and stereotypical characterizations of Jewish culture.

Hamantaschen are a triangle-shaped cookie made during the Jewish festival of Purim, a holiday that commemorates Esther’s victory over Haman and his plot to destroy the Jewish people. Hamantaschen are shaped to resemble Haman’s 3-cornered hat and traditionally stuffed with sweet fillings made of poppy seeds, dried fruits, or fruit preserves (among others). Sounds tasty, right? But achieving the right balance is not always easy to pull off.

So I set out to create a cookie that hit all the right notes: The cookie itself would be a pleasure to eat, whether or not you encountered filling in each bite. And the fillings themselves would be were after baking, but not too sweet. Here’s how to nail it:

The Associated Press explains how this sinister/boring Archive Repair Project is actually wonderful:

Epicurious is righting cultural wrongs one recipe at a time

With a new Black editor in chief and ambitious promises to do better, a little corner of the Conde Nast universe is taking on racial and cultural injustice one recipe at a time.

Since July, the small staff at Epicurious, a resource site for home cooks, has been scouring 55 years’ worth of recipes from a variety of Conde Nast magazines in search of objectionable titles, ingredient lists and stories told through a white American lens.

“It came after Black Lives Matter, after a lot of consciousness-raising among the editors and staff,” said David Tamarkin, the white digital director for Epicurious. “It came out of conversations that we had about how we can do better, where are we failing and where have our predecessors failed?”

Called the Archive Repair Project, the work is also an outgrowth of complaints and controversies at Conde Nast. But it’s just one effort on a full plate of initiatives, said Sonia Chopra, who’s been executive editor of Bon Appetit and Epicurious for about four months, working under the new editor in chief, Dawn Davis.

Epicurious and Bon Appetit have been at the center of accusations that also plague others in the food world: undervaluing staffers of color, perpetuating structural racism, racial and gender discrimination, and more. Some of those issues led several Bon Appetit employees to leave earlier this year after Editor-in-Chief Adam Rapoport resigned over a 2004 Halloween “brownface” photo and amid allegations of racial discrimination. …

One of the first issues “repaired,” he said, was use of the word “exotic.”

“I can’t think of any situation where that word would be appropriate, and yet it’s all over the site,” Tamarkin said. “That’s painful for me and I’m sure others.” …

Other terms, such as “authentic” and “ethnic,” are also among repairs.

The work, Chopra said, is “certainly something that I think not just Conde Nast brands but all over food media and media in general are really thinking about.”

Careers in privatized Ministries of Truth are opening up for journalists everywhere! Why report on the present when you can correct the past?

Since July, when Tamarkin outlined the project on Epicurious, he and his staff have fixed about 200 recipes and other work. Some repairs are more complicated than removing a single word, such as an entire story about the “ethnic” aisle at the grocery store.

“We have published recipes with headnotes that fail to properly credit the inspirations for the dish, or degrade the cuisine the dish belongs to. We have purported to make a recipe `better’ by making it faster, or swapping in ingredients that were assumed to be more familiar to American palates, or easier to find. We have inferred [I think they mean “implied”] (and in some cases outright labeled) ingredients and techniques to be ‘surprising’ or `weird.’ And we have published terminology that was widely accepted in food writing at the time, and that we now recognize has always been racist,” Tamarkin wrote.

He noted: “Certainly there will be times when our edits do not go far enough; some of our repairs will need repairs.”

It’s a never-ending job, like painting the Golden Gate Bridge.

For Bon Appetit, that’s exactly what happened when an outcry among readers led it to make multiple changes including the headnote and references to Haiti on a pumpkin soup recipe put forth by Chef Marcus Samuelsson, a guest editor. The magazine referred to it as soup joumou, a beloved Haitian staple that symbolizes the country’s bloody liberation from its French colonizers.

It was not soup joumou, but was intended by Samuelsson as an homage. The magazine adapted an entry from one of his cookbooks, “The Rise: Black Cooks and the Soul of American Food.” Both Bon Appetit and Samuelsson, who is Black, apologized after calls of erasure and cultural appropriation.

Much of food media is facing race and ethnicity fallout that can be traced to white dominance in the highest echelons of the field. On the Epicurious repair project, for instance, just 31% of the people identifying and fixing the archive are staff of color.