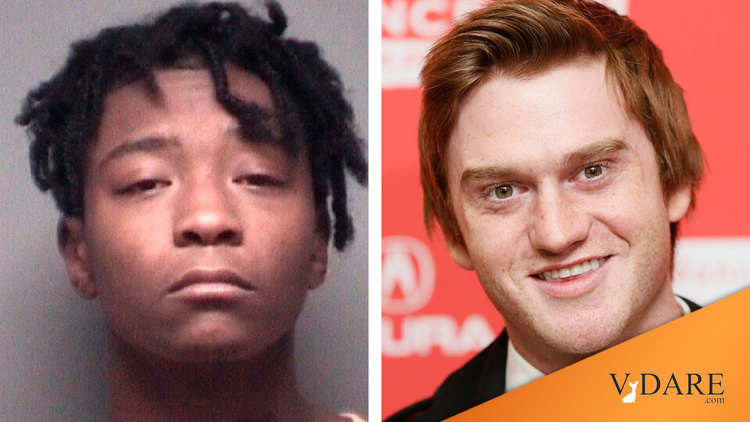 Were white privilege real (and were America truly a nation dominated by a white supremacist power structure in need of dismantling), you’d be hearing about what happened the white actor Eddie Hassell on an endless 24/7/365 loop.

Odds are, this is the first you’ve heard of what happened to him.

White privilege is a myth. Hiding the reality of black criminality is the primary function of our corporate media.

His Name is Eddie Hassell.

Grand jury indicts man on capital murder charge in death of actor Eddie Hassell: Authorities say the robbery of Hassell was random. Hassell, whose credits include “The Kids Are All Right,” was from Waco, WFAA.com, February 3, 2024

A man was indicted Wednesday by a Tarrant County grand jury in the shooting death of actor Eddie Hassell. D’Jon Antone, 18, was indicted on a capital murder charge. Grand Prairie police say Hassell, 30, was the victim of a random robbery before being shot and killed by the suspect on Nov. 1, 2020.

Police found Hassell with gunshot wounds and he died at the hospital. Detectives said a car that was taken from the scene was later recovered. Hassell, who was from Waco, played the role of Clay in the 2010 Oscar-nominated film “The Kids Are All Right,” and Phil Nance on the NBC TV show “Surface.”

We momentarily lost our nation, because we feared being called “racist” more than putting our interests first. A white actor was murdered by a black teenager in a “random” act of violence, and we are supposed to fall to our knees and apologize for being born white and immediately mortgage our future on the idea people will only be judged on the content of their character.

The entire concept of "white privilege" immediately positions all white people as guilty for the sins of their ancestors, regardless of their position in life.

Eddie Hassell was an actor. He was murdered in a “random” robbery by a black teenager, and his homicide barely has been reported in the national press.

By doing so, we win.

His Name is Eddie Hassell.