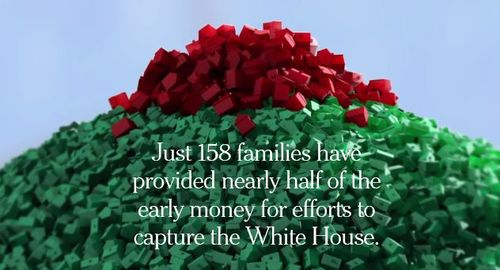 The Way We Think Now: Donors Are "Overwhelmingly White, Rich, Older, And Male"...

As you may have noticed, the New York Times strongly objects to American citizens financing political campaigns. (If the rich are to have influence over the American political process, the respectable way is for a Mexican monopolist who has made billions off encouraging and exploiting illegal immigrants to hand a few hundred million dollars over to the New York Times.) Thus, the top story on NYTimes.com at the moment.

What’s interesting is how flagrant the Identity War hate speech is getting. Especially when you realize that the prime dynamic in American politics today is the top using totems from the bottom to war on the middle.

And you can see the value of belonging to a Designated Victim class. The NYT’s article is full of demographic breakdowns regarding these 158 donors, but the word “Jewish” doesn’t appear in the article.